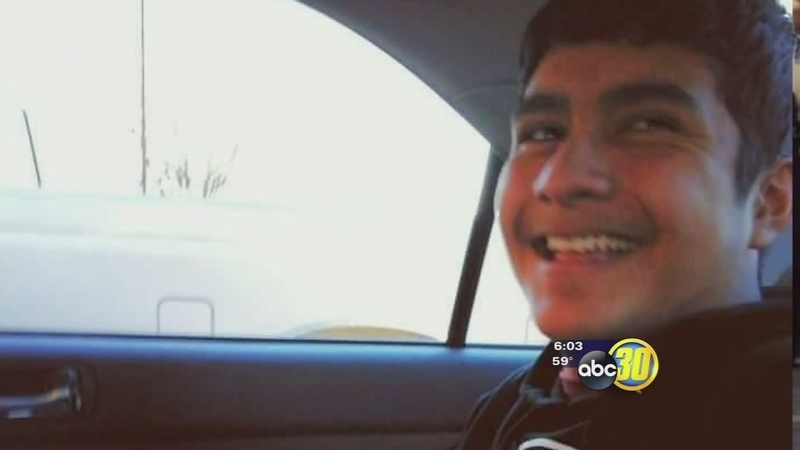 FRESNO, Calif. (KFSN) -- A North Valley teenager was killed in a hit and run while riding his bike on Easter Sunday. Raymond Martinez, 16, played football at Livingston High School and had dreams of one day playing for Fresno State.

Officers at the CHP said they've received several leads and are hoping to have more information on the suspected driver by Tuesday. The teenager was trying to avoid a pothole when a car hit and killed him.

Those who loved 16-year old Raymond are finding it hard to come to terms with his sudden death on Easter Sunday. Raymond was riding his bike with his brother on Walnut Avenue on the outskirts of town when a car hit and killed him. His brother didn't get a good look at the car or driver who didn't even stop.

"It was dark and he was more concerned about my brother than anything, so he didn't get a good look," said Brittiany Martinez, victim's sister.

Raymond's sister said he was trying to avoid a pothole on the busy road. The impact of the crash sent the nearly 6-foot tall football player across the street. The car never stopped, and now his family and friends are pleading for the driver to come forward.

"If he stopped, or he tried, I could understand that-- but you didn't even stop, you didn't slow down, nothing, and my brother is big. There's no way you didn't see him or didn't notice that you hit him." said Brittiany.

Raymond's best friend Kyle Mull came down from Modesto as soon as he heard about what happened. He said he was supposed to ride bikes with the two brothers but had to head up north to get ready for class.

"I just can't believe that someone wouldn't stop. Why wouldn't you, at least slow down or make an attempt?"

Mull said his friend had big dreams of going to college and getting into law enforcement. He was always happy and loved by many.

"He would always make me laugh and smile. He was just an amazing person. No matter how sad or angry or what was going on, he could put a smile on your face," said Mull.

Family members are hoping someone comes forward with information to help them identify the driver who hit Raymond.