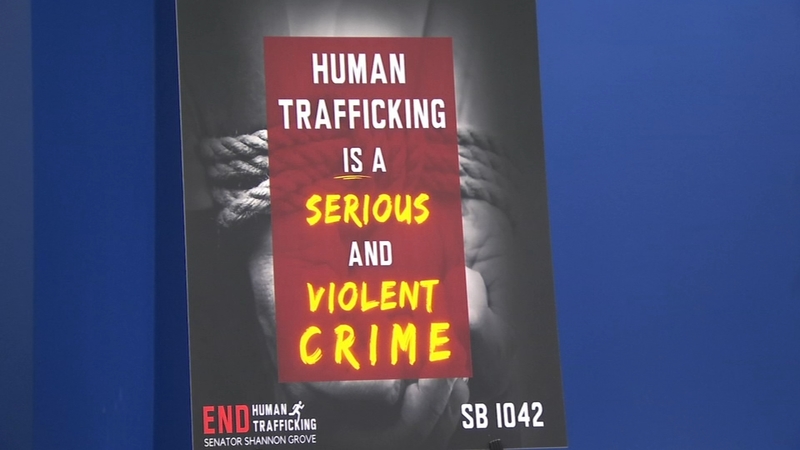 FRESNO, Calif. (KFSN) -- Debra Rush has dedicated her life to being a fierce advocate for victims of human trafficking.

The Breaking the Chains founder says SB 1042 would enhance those efforts.

"As a survivor, it is abhorrent to me to think that what I have gone through and others went through were not violent," she said.

The bill would amend existing law to add human trafficking to the list of both serious and violent crimes in the state of California, including for the purposes of the three-strikes law, which would enhance the punishment of those convicted.

One of the largest hubs of human trafficking is right here in California, including in the Central Valley, which is why local law enforcement is coming to voice their support for this legislation.

"There are thousands of girls that are trafficked every day in the Central Valley," says Fresno County District Attorney Lisa Smittcamp.

Smittcamp says in 2020, her office received 15 cases of human trafficking. In 2021, she says that number doubled.

In a press conference Friday, she and other Valley leaders said SB 1042 would play a pivotal role in combatting trafficking.
"The vast majority of victims in this type of crime don't want to do this," says Fresno Police Chief Paco Balderrama. "They're trapped and they're looking to us to rescue them from that situation."

Balderrama said his department made 186 arrests last year, resulting in the rescue of 106 girls. Those saves are at 29 so far this year.

Co-author of the bill, Assemblyman Jim Patterson, says the law and consequences need to reflect the severity of the crime.

"We want to make sure these traffickers are treated as the criminals they are and we put that in the statute," he said.

The bill is still in the very early stages of the legislative process as it was just introduced two weeks ago.

In researching for this story, there wasn't any vocal opposition to it, but we do know opponents of the three strikes law as a whole often argue it disproportionately impacts people of color.

We will continue to monitor the progress of this legislation. It will go to the public safety committee for review next.