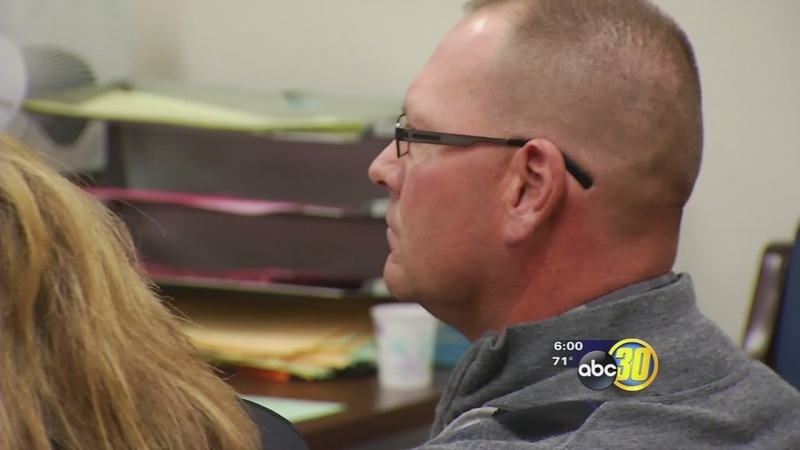 TULARE COUNTY, Calif. (KFSN) -- A former Exeter police officer learns his fate after pleading guilty to having sex with a minor in the police explorers program.

Jeffrey Detwiler was arrested in 2013, he plead guilty last month to having sex with a minor and possessing a controlled substance.

A Tulare County judge sentenced Detwiler to 45 days in jail and community service as his punishment. The judge also ordered Detwiler never to have contact with the victim again.


Former Exeter Police Sergeant Jeff Detwiler sat, not moving while listening to his victim read how he has impacted her life. Detwiler pled guilty in February to having sex with a minor.

Action News is not showing the victim, but she did read a statement in court. She said, "He took away what were supposed to be the best years."

"I was very proud of her for making the statement, it's certainly a difficult thing to do," said Randy Groom, City Manager, City of Exeter.

Groom said the department began investigating Detwiler in 2013. He was arrested in August of that year. Detwiler was over the department's Police Explorer Program - the victim was in that program as a teenager.

Thursday she said: "I felt I could trust him."

Tulare County Assistant District Attorney Anthony Fulz said Detwiler abused that trust. "He really took advantage of not just his position as a police officer, but as an advisor to the Police Explorers, and really abused that trust."

Detwiler didn't speak but his attorney said he does apologize. Judge Gary Paden sentenced Detwiler to probation -- forbidding contact with the victim. He also has to serve 45 days in jail and complete 100 hours of community service.