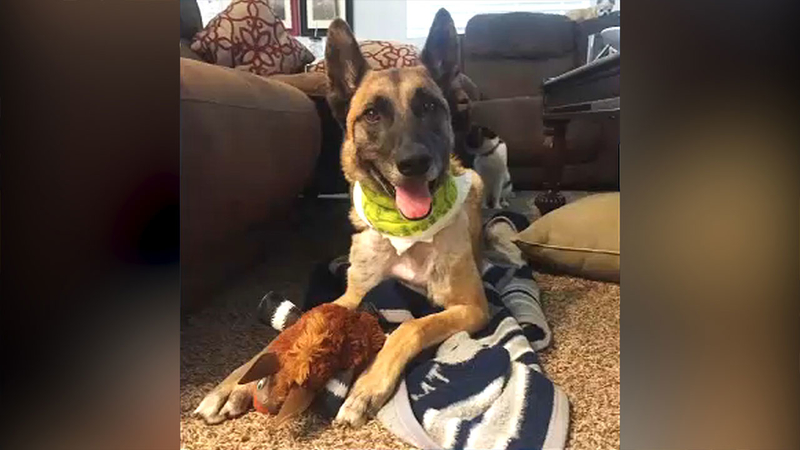 Jack was released from a Visalia veterinary clinic on Wednesday, after an undercover sheriff's detective was forced to shoot him during an unfortunate incident on Tuesday.

Lt. Jon Brown says his condition continues to improve, but the department hasn't determined if Jack will return to work.

"What we're going to do is we're going to wait for the veterinarian's report," Brown said. "The veterinarian has a lot to do with what happens to our dogs and at what age we retire them. Sometimes they retire early based on medical conditions or what have you. Sometimes they're able to work a little longer. It depends on the health and fitness of the dog and that dog's appropriateness for whatever use they've been trained for."

At seven, Jack is at the age where he could retire.

He's been on duty for five years, mostly working patrol.

But about a year ago, he and his handler were transferred to the department's CATTCH unit, which focuses on finding and apprehending the most wanted suspects in Tulare County.

In Tulare on Tuesday, Jack chased after a man wanted for robbery and carjacking, but at some point during the chase, Jack confused the suspect with an undercover sheriff's detective.

Jack latched onto the detective's tactical vest and wouldn't let go, forcing the detective to open fire on the dog.

Jack, who was shot in the neck, had a successful surgery, spending just one night at the vet.

At this point, it's too hard to tell if Jack will fully recover from his injury.

But for now, he's resting, and playing a little-with his partner in fighting crime.

"He's got a great handler," Brown said. "He's a happy dog, and he loves to go to work. So I know that Jack wants to come back to work, we'll just wait to see if he can."

At this time the department says they're not looking for a replacement for Jack.

But they could always use donations for the K9 unit.