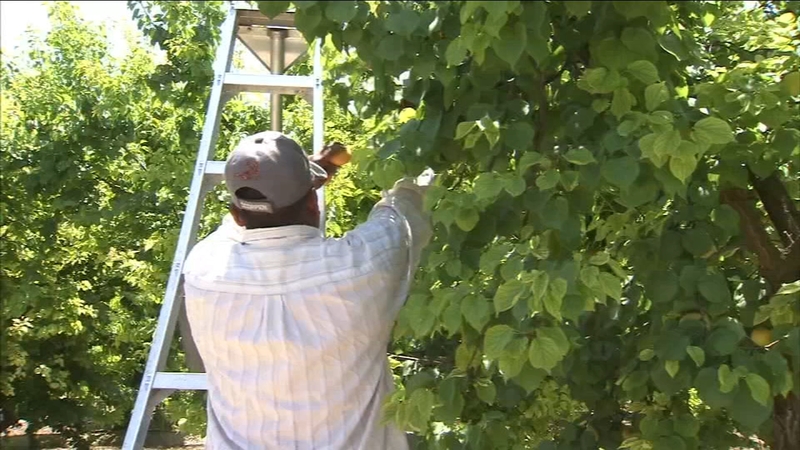 FRESNO, Calif. (KFSN) -- On this Labor Day, a man who took advantage of workers is sitting in the Fresno County jail, awaiting sentencing for human trafficking.

Prosecutors tell Action News when they filed the case against Efren Alvarez, Sen. Dianne Feinstein's office mentioned they might be the only ones tackling labor trafficking in court.

So they're hoping his conviction sends the message this is a serious crime and police are paying attention.

For the hours they spent thinning Fresno County fruit trees, several workers got paid in cash, but their pay seemed to come up short.

Even worse, the crew supervisor manipulated them to make sure they couldn't quit.

"While they were here working for him, he was exploiting them financially," said prosecutor Lynette Gonzales. "He was invoking a number of abuses - psychological, threats of physical harm as well of threats of reporting to immigration."

Prosecutors say Efren Alvarez took his victims' visas and passports and held them as collateral for loans he gave them to pay the rent in the home where he placed them.

He used workers who came to the United States legally but didn't have clearance to work.

They didn't know the laws, but they did know they were working illegally, and they had a language barrier. So, they felt trapped.

They worked every day in fear, even when police came to help them in March 2016.

"There's a lack of trust in any of the authorities," Gonzales said. "And even our victims testified that when they were rescued, they were unsure they were actually being helped."

Trafficking is defined as a form of modern-day slavery in which people are forced to perform labor or services using force, fraud, or coercion.

But outside of the sex trade, it's rarely prosecuted, even though prosecutors think it's somewhat common.

"It's a crime that's probably happening under our noses, especially with respect to labor trafficking, not just in the agricultural context, but in the restaurant industry, construction industry, hotels, domestic servitude is another one," Gonzales said.

Jurors convicted Alvarez on one count of human trafficking and three counts of extortion.