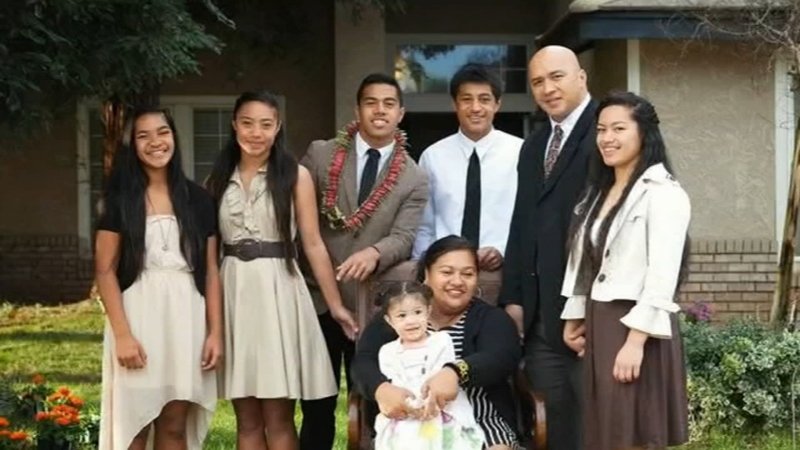 FRESNO, Calif. (KFSN) -- A final send-off came Monday for a Fresno County correctional officer who died this month but survived for five years after a gunman shot him at the main jail.

Malama Scanlan was proud of his Polynesian heritage and his work in law enforcement, and his funeral service drew on both.

Dark skies and a downpour arrived at Redbank Cemetery just after the procession delivered Malama Scanlan to his final resting place.

The 46-year-old earned a reputation as a guardian and a warrior - a hero with a heart.

"Malama is the embodiment of a remarkable dad, exceptional husband, extraordinary friend, and simply loved to serve others expecting nothing in return," said his eldest son, Robert.

Family members and friends filed into the SaveMart Center for his memorial services.

Sheriff Margaret Mims read from Scanlan's employment file, where supervisors praised him and suggested him as a candidate for promotion.

"He was always encouraging and willing to help," the sheriff said. "He was not one to seek attention, be boastful, or look for accolades. He was steady, dependable, and loyal."

His Samoan heritage helped create that character and his services leaned into the culture with Polynesia dancing and drums.

"He was our hero, our warrior, our heart," said his cousin, Eric Scanlan.

Malama Scanlan leaves behind a wife and six kids, plus an extended family across the globe.

He also leaves behind a surviving victim of the jail shooting, Juanita Davila, who sent a note for co-worker Eulalio Gomez to read.

"You are truly my hero," Gomez read from Davila's letter. "You sacrificed your life for me and others that day. Many people run from danger but you and I ran and confronted the enemy face-to-face"

Co-workers honored that sacrifice by standing outside in a storm to pay final tributes.

One of them said the rain was Malama's way of sending everyone off with a fresh start.

Until they meet again in paradise.