Mangal Singh Bhatti worked as a truck driver, helping to support his family here in the Central Valley and back in India as well.
KFSN
By Corin Hoggard 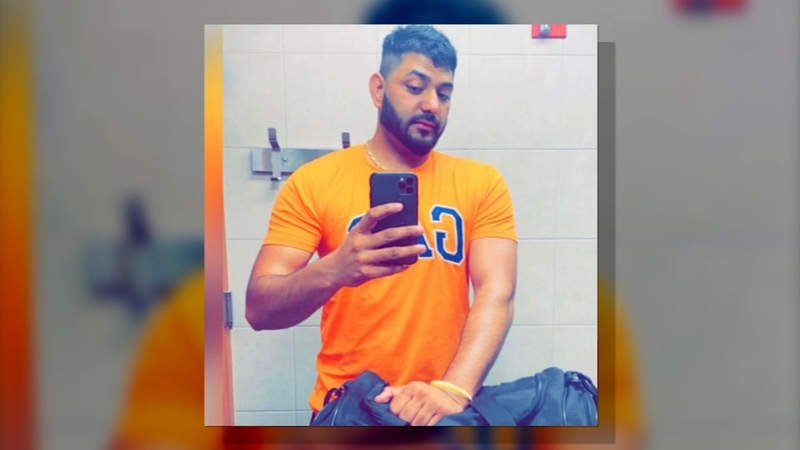 FRESNO, Calif. (KFSN) -- Loved ones came together Friday to remember the innocent victim of an unusual car crash that killed two people.

On August 4, Mangal Singh Bhatti was alone for just a matter of seconds when his friends left him in their car to go look for a used car to buy.

CHP officers say an SUV bounced over a concrete median on Clovis Ave. and crashed into the passenger seat of the Camry where Bhatti had stayed to rest.

His friends thought he'd be OK when he left in an ambulance, but got a shocking phone call from the hospital a few hours later.

Bhatti - like Todd Lyman, the driver who hit him - had died.

"His mom, his sister in India, his brother -Everybody in his family is in depression right now," said Bhatti's friend, Shiva Kapoor. "It's just crazy right now."

Dozens of his friends and family members remembered Bhatti Friday.

Not long before the crash last week, Bhatti had taken his mother to the airport so she could go home to India.

She couldn't return in time for the funeral.

But everyone there remembered her son as a warm, funny, and generous man.

He came to the U.S. five years ago and worked as a truck driver, helping to support his family here in the Central Valley and back in India as well.

"Not only his family," said Bhatti's friend Gurdeep Singh. "He helped everybody. He never said no to anybody. Never. You could ask anything from him."

"My brother was very cool and kind," said Sukhpreet Singh of his close friend. "He also helped the needy people."

CHP investigators still haven't determined what exactly caused the crash. Surveillance video from the auto dealership was inconclusive and they haven't yet gotten back toxicology results.