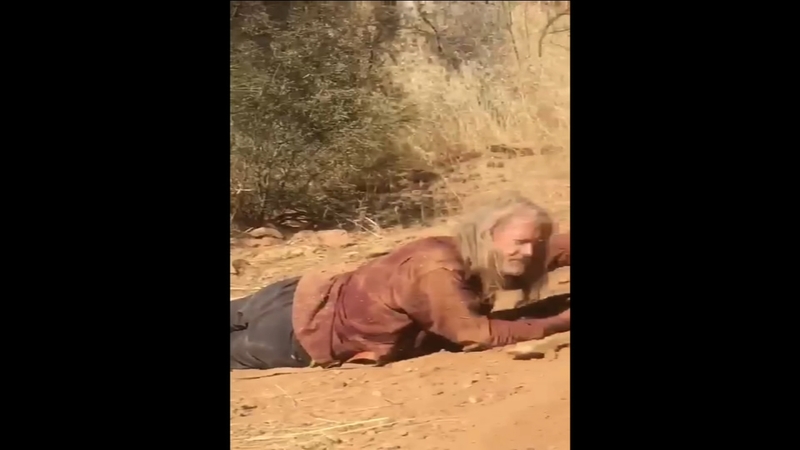 COULTERVILLE, Calif. (KFSN) -- A tow-truck driver made all the wrong turns in Mariposa County, ending up on an isolated, dirt road -- only to save another man's life.

He drove all the way up to Coulterville for a call, only to deny the job when he got there.

While trying to find his way back home. He found a pooch blocking his road.

A tow truck driver is being credited for helping to save a man's life in Mariposa County thanks to the help of the victims' dogs.

By the time Martin Hall shot this video Sunday, he would already had a very "ruff" day.

The tow truck driver showed up in Coulterville for a job he eventually had to decline.

He took a detour on his way back, lost his way, and ran into this pooch who refused to leave the middle of the road.

"I knew it was weird because there was nothing around me. I knew it was somebody's dog, so something was going on."

Martin assumed the dog was lost and tried to catch her, even bribing her with a sandwich.

When all these options failed, he decided to shoot a Facebook video before leaving
That's when he heard the cry for help.

You can see in the video as Martin frantically tries finding the source of the noise.

"Is that your dog back here?"

He eventually finds a 67-year-old man, caked with dirt, lying in a field.

Next to him was a second dog, that stayed by his side while the other went in search for help.

"I think he was pretty relieved, he thanked me. He had some courage. he had crawled on his stomach for 50 to 200 feet trying to get home."

The man told Martin he slipped on a rock during an early morning walk and likely broke his hip.

If Martin had not stopped, he was planning on slowly inching to his house, more than a mile away.

"There's probably been at least five, close to six things that had to happen for that to be there at the time."

Martin says he is had a lot of time to reflect all the seemingly "wrong" decisions, it took him to be in the "right" place.