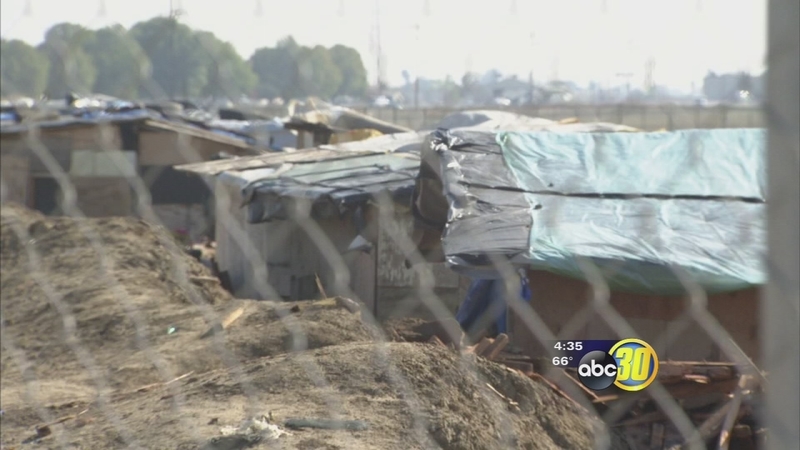 FRESNO, Calif. (KFSN) -- Residents of a growing shanty town along farmland near Mendota were evicted from their homes Friday.

Eviction notices were posted on structures and poles last week, but over a dozen people remained at the homeless encampment. Some insisted they weren't going anywhere, but that changed when authorities arrived.

Fresno County Sheriffs deputies and other personnel came to issue eviction notices to people living in a, now fenced-in, shanty town. They had to immediately leave the shacks they have called home for the past year. "I don't know right now," said Mario Rodriguez when asked what he was going to do. "I don't have a place to go, so I don't know."

Another man said he would ride his bike around the area to see if there was an apartment he might be able to rent. People packed up whatever belongings they could carry as they were escorted from the homeless encampments.

Arrangements were also made for those who had puppies and other pets, but they all had to leave the property. Fresno County Sheriff Margaret Mims said her department would provide services for the evicted. "If they need medical attention we're making sure that happens," Mims said. "Private security will be here for the next 15 days because that's how long people will have to come back and get their possessions."

The encampment is located in an old irrigation ditch on land owned by the Westlands Water district.

Johnny Amaral with Westlands Water said that "if we have any type of rain event or major storm event like some are predicting, that will be flooded out. Nobody's happy about what's happening here today, but it has to happen for the health and safety of the people here."

The Poverello house has offered to house six of the residents and had a van ready. But the residents did not want to leave the area.

Some have set up shelters here because they couldn't find enough work in the fields. "They're looking if they can get some type of temporary work, get a room for rent," said Juan Gamez with Clinica Sierra Vista. "Do something other than just being out here in the open."