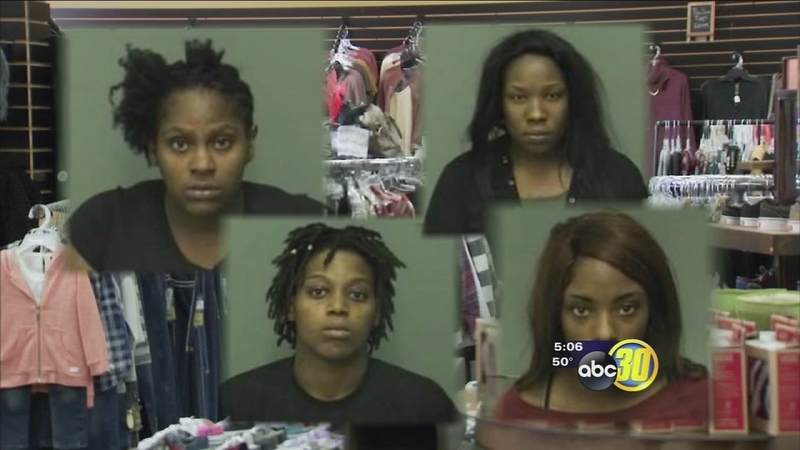 ATWATER, Calif. (KFSN) -- At Envy Fine Clothing in Atwater, the owner was not about to put up with shoplifters who got loud and unruly Wednesday night.

"There were four of them and two of us, so it was pretty intense," said store owner Darlene Dover.

Dover owns the boutique where security cameras were rolling as a shopper casually slipped a pair of True Religion jeans into a bag.

"We then prepared ourselves at the front of the door, asked to look in her bag, and that's when they attacked my security guard."

Workers hit the panic alarm and officers were called to the store. The owner was holding the suspects at gunpoint.

"It's crazy because then it kinda becomes a situation where you can't really fight with them. You just have to make sure that they understand that you are armed; they need to stay where they are at. Because anytime their hands move, you are in danger," said Dover.

"Around here, we don't get those types of calls and I think now, living in these times, I think a lot of property owners, store owners, are a little fed up and are starting to retaliate a little bit with the use of force," said Dave Cardoza, Atwater Police Detective.

The store has been targeted by thieves many times before, but this time the owner felt immediately threatened.

Detectives believe the women hit up several other stores in the area before they went to Envy.

"It sounded like upon being interviewed that all four females are from Fresno. They did conspire to drive to Merced and Atwater to commit the crimes," said Cardoza.

The store owner said although the jeans are valuable, she pulled out the gun because the situation escalated so fast.