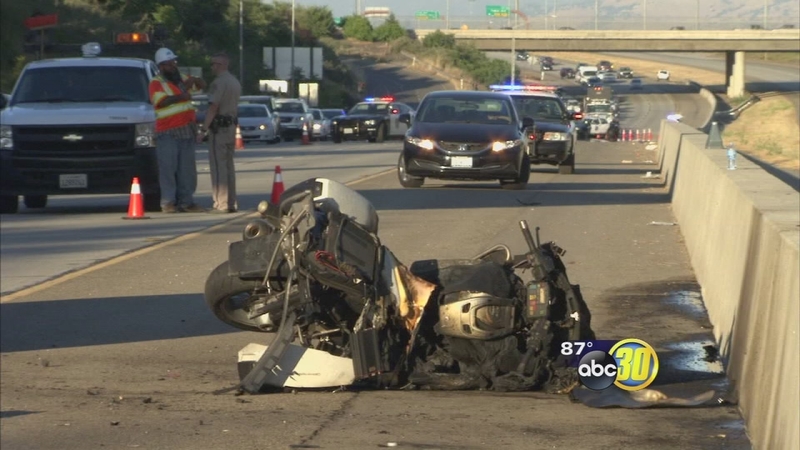 FRESNO, Calif. (KFSN) -- The California Highway Patrol is urging drivers to be cautious after one of their own is hit by a truck on Highway 180 in Fresno.

It happened around 5:30 p.m. Tuesday in the eastbound lanes between Clovis and Peach Avenues, shutting down lanes for hours.

The officer's motorcycle was left on the opposite side of the freeway on fire after a series of events turned horribly wrong.

#PICTURE: CHP Officer is taken to hospital w/major injuries after crash on HWY 180. Pic of crash from #abc30insider. pic.twitter.com/BYtc0Dn3AU

Authorities say it all started with a blue pickup truck that the officer was first responding to because it had crashed.

The CHP says the wreck had people looking, including the driver of a red, 4-door Chevrolet Silverado which lost control and collided with the officer.

This is the truck that hit the officer from behind. This driver was not injured. Stayed at scene and is cooperating. pic.twitter.com/V0hiCpQnwV

"It appears he may have been looking at the other incident to the right, and maybe came upon traffic a little too fast, and then swerved," Axel Reyes with the CHP explained.

That's when they say he hit the officer and forced him into the median.

"The motorcycle that the CHP officer was riding in flipped over the center median and caught on fire," Reyes said.

The officer landed on the eastbound side of the 180 with serious injuries.

He was rushed to the hospital where he was met by fellow officers, while the accident caused a traffic jam in both directions.

The driver of the truck stayed on scene and is cooperating with investigators.

His wife says they're from Sanger and he was simply on his way home from work.

"This is the message we always put out is, pay attention in front of you to the road," Reyes said. "That's where you should be looking. And that's where things like this occur."

Prayers and well wishes for the Fresno CHP motor officer,who was involved in a collision today, are appreciated by all. Thank you.