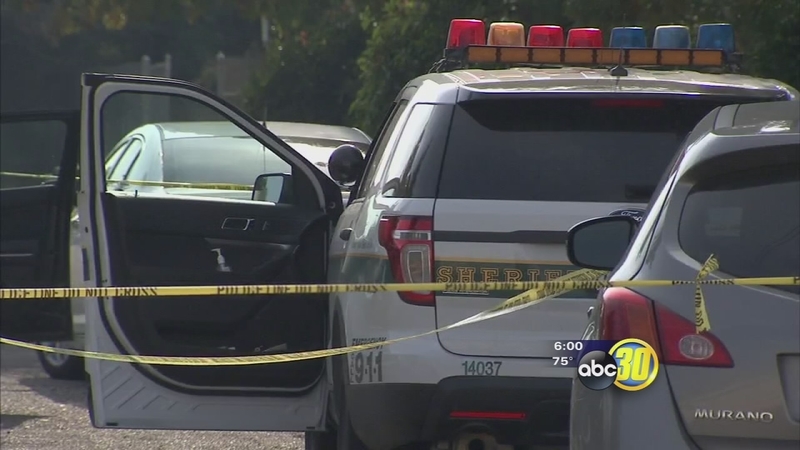 On Monday, Sgt. Rod Lucas was killed when he was hit by a bullet that accidentally discharged. The deputy wounded in Friday's incident is expected to recover. The injured deputy was getting ready for an operation by putting the weapon on his holster when his gun went off.

"But they were getting ready to do an operation," Lt. Joe Gomez Fresno Police Department explained. "I don't know what with the search warrant or an arrest pick up so they were gearing up for that that's when he was putting his thigh holster on when the gun went off."

"It's similar to a Glock where there's no external safety" Gomez explained. "So, it is easy to do something like that with these guns."

"Deputies do carry handguns, Smith & Wesson .45 that do not have a thumb safety and the safety is built into the trigger," Botti explained. "That is our standard weapon for the patrol staff."

Botti could not say if the weapon that accidentally discharged and claimed the life of Lucas on Monday had a similar safety mechanism, but Botti said the two incidents are in no way related.

"I know it's on the top of everybody's mind right now given what happened with Sgt. Rod Lucas earlier in the week," he said. "I think what we need to keep in mind for everybody is these are two totally separate situations."

Both Fresno police and the sheriff's department will investigate this incident.

"Anytime we have an accidental discharge it does prompt an investigation and for the department what happens will determine if there is a training issue or something that will come back in the investigation," Botti said.

The deputy wounded in Friday's incident is being treated at a local hospital and his wounds are not life-threatening. Authorities said the deputy has been on the force about 10 years and spent the last two years in the MAGEC anti-gang unit.
Related topics:
fresno southeastfresno countyaccidental shooting
Copyright © 2021 KFSN-TV. All Rights Reserved.
FRESNO COUNTY
Looking back at the ups and downs of COVID in Central CA
Map shows CA county reopening tiers
Fresno Co. anti-marijuana operation leads to 37 arrests
Carnival in Firebaugh combines fun with COVID safety
TOP STORIES
LIVE: Putin addresses Russia after hours of talks with Biden
LIVE: Newsom to speak as CA's reopening is met with exuberance
Merced teacher back home after battle with COVID-19
Looking back at the ups and downs of COVID in Central CA
Arson investigation after fire burns 2 Fresno homes
24-year-old man shot in southwest Fresno, police say
What changes throughout Central California as state reopens
Show More
Tips for staying safe during a heat wave
Is being vaccinated a requirement for returning to work?
Fresno reopens public pools amid heat wave
Fresno police chief proposes $1.9M budget for department
Cooling centers open in the Central Valley
More TOP STORIES News