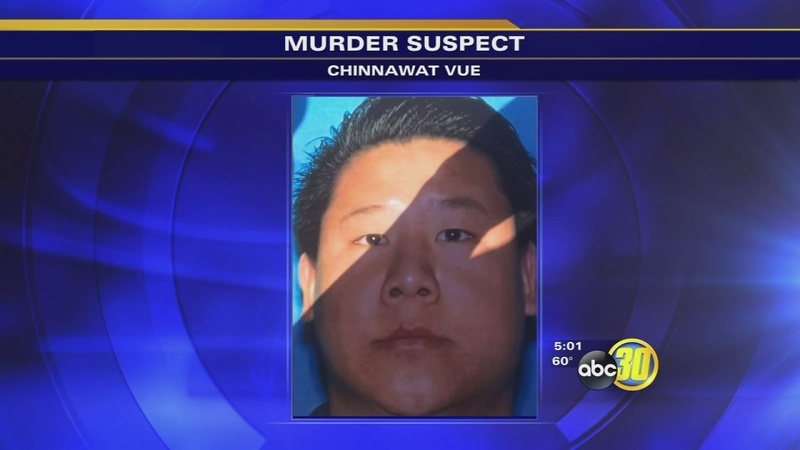 FRESNO, Calif. (KFSN) -- Tuesday, investigators found a man wanted for murder near Hume Lake. The search for 23-year-old Chinnawut Vue began when relatives called police to report his wife had been shot at the couple's Northeast Fresno home. Officers said the couple was having domestic problems. Early this morning, police said Vue killed his wife, then, slit his own throat before heading to the foothills.

Just after 8:00 Tuesday morning, officers took a call from concerned family members who got a strange message from Vue. "He has a cut because, he texted the photo of himself to his relatives here and he also texted, or had called them also, and said he had killed his wife. His wife was in there dead," said Lt. Joe Gomez, Fresno Police Department.

Emergency crews and police pulled up to the crime scene to find the 21-year-old mother of three inside her home dead, with a blanket on her. A family friend said the couple had been struggling recently after an allegation of an extramarital affair surfaced. Family members were interviewed at length by detectives Tuesday-- but declined to comment afterward. Investigators said it appears the crime scene is rather extensive. "It was spread out throughout the house. Bathroom, where she was located, the garage, so there was quite a bloody scene," said Gomez.

Four hours after the homicide was discovered, officers finally found the suspect with the help of the US Forest Service. Vue was located sitting in his white Toyota Sequoia near Hume Lake and surrendered when he was confronted.

Vue is being treated at Community Regional Medical Center for his cut throat.