Rough Fire burned through strategies before it was contained 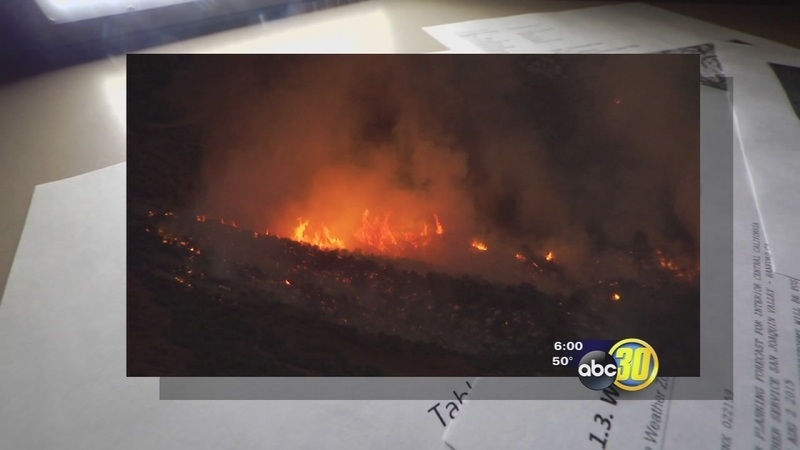 Rough Fire burned through fire fighters strategies before it was contained

Within a few more weeks, the flames would torch more than 150,000 acres, and baffle federal firefighters mapping its progress. "It had already breached several of our management action points," said Denise Tolmie, USFS.

The fire forced a lot of evacuations, both human, and animal, and Action News received some complaints about fire management. So we made a public records request to uncover weeks of strategy reports. The documents reveal a few misjudgments.

For the first couple weeks, planners estimated firefighting costs of half a million dollars or less. It eventually cost more than 100-million. They also thought it wouldn't grow to more than 5,000 acres, and it'd be fully contained by August 22nd. "From day one, this fire was named appropriately, the Rough Fire," said Tolmie.

Lightning sparked the fire in steep terrain, accessible only by helicopter. But Tolmie said her team thought they'd gained the upper hand at least three times, only to watch the fire pass containment lines. Four years of drought helped it move in ways firefighters had never seen before. "They had never seen fire burn through rock before. It basically, the moss on the rock was dry enough because of the drought conditions that it was able to spot and work its way across that rock ridge line."

The reports also show an approach federal firefighters have taken, in theory, since the 1990s. The strategy is to let lightning-caused fires play their natural ecological role. Fire can be beneficial for the forest. It can coax the seeds out of pine cones and breathe new life, but, in this case, it was too extreme. It left thousands of acres of forest looking like the surface of the moon.

A recent study published in Science Magazine criticizes fire management strategies over the last century, noting that 98-percent of wildfires are knocked out before they reach 300 acres. One of the authors spoke with Actions news and he says the feds need to thin the forests through controlled burns and other methods to avoid this type of unpredictable fire. "Fuel conditions have changed and we're not going to get historically typical fire behavior under extreme conditions," explained Dr. Greg Aplet, The Wilderness Society.

The net result is a charred landscape, an increased potential for rockslides and mudslides, and danger on the trails attracting people to the Sierra. That's one of the main concerns for the high sierra volunteer trail crew. "You're talking about a lot of trees falling because you've got a lot of trees dead standing that got burned-- they'll fall across the trail," said Rick Fleming, High Sierra Volunteer Trail Crew.

Fleming says it'll take at least five years to repair damage on dozens of miles of trails. The forest itself might need a full century to recover. And that's assuming no more massive fires. When asked if a fire like this was ever going to be seen again Tolmie said,"I would say to expect it."