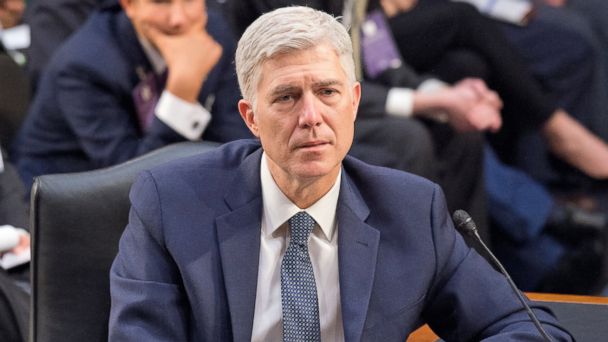 ABCNews
By ALI ROGIN
The Senate has altered the long-standing practice for confirming Supreme Court justices after Democrats today blocked the nomination of Judge Neil Gorsuch.

Republicans on their own did not have enough votes to end the floor debate on Gorsuch's nomination - a move known as cloture - under the rule requiring at least 60 votes. The first Senate vote to end debate on his nomination failed with a vote of 55-45.

The proceedings that make up the nuclear option are somewhat wonky. The majority leader and presiding officer, guided by parliamentary experts, go through a series of choreographed steps in which the leader suggests a change to the rules, the presiding officer challenges him and then the leader calls a vote on a rule change, which requires only a minimum of 51 votes.

A vote to sustain the ruling of the chair failed 48-52, and the Senate rules changed. After the rule change, the Senate held a second cloture vote, this one with only a 51-vote threshold.

That motion passed, starting the clock on a 30-hour debate period, after which the Senate will vote on the Gorsuch confirmation itself, likely sometime Friday afternoon or evening.

Senate Minority Leader Chuck Schumer of New York made several attempts to delay the nuclear option process, with no success.

Republicans have accused Democrats of unfairly obstructing a qualified jurist, while Democrats argued that Gorsuch is too extreme for the court.

"One way or the other, we will confirm Judge Gorsuch," McConnell told reporters Tuesday.

Today on the Senate floor, McConnell made a last plea to his colleagues not to force him to trigger the nuclear option.

"So let me say this to my Democratic colleagues: If you truly cannot support the nomination of this eminently qualified nominee, then at least allow the bipartisan majority of the Senate that supports Gorsuch to take an up-or-down vote," McConnell said. "You already deployed the nuclear option in 2013. Don't trigger it again in 2017."

But the moment the last motion passed to move the Gorsuch nomination forward, McConnell let himself show he was pleased. He gave high-fives to those around him and a thumbs-up to the room.

His invocation of the nuclear option was not be the first time it has been done. Then-Majority Leader Harry Reid, D-Nev., did the same thing in 2013 in response to what Democrats said was historic obstruction of Barack Obama's Cabinet nominees and lower-court judicial appointees. The threshold was lowered on those votes, but the minimum for Supreme Court nominations went unchanged.