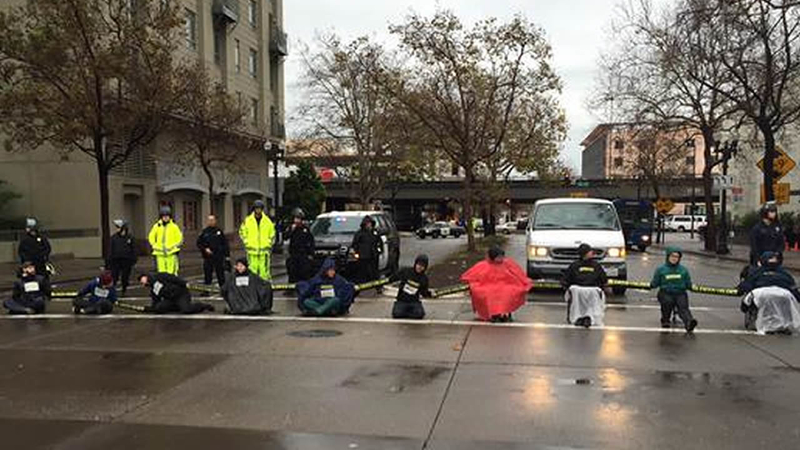 OAKLAND, Calif. -- Oakland police arrested more than a dozen protesters who blocked the Oakland Police Department headquarters and nearby streets on Monday morning, calling for an end of police killings of unarmed black people.

"Everyday, every 28 hours, a police officer or a security officer murders a black person in this country, either a black man, women, children, the elderly, and I am tired of it, and that's why I am here," explained protester Jova Johnson, who lives in Oakland.

Oakland police told ABC7 News that there were no permits issued for Monday morning's action and that it came as a surprise to city planners and law enforcement.

Officers arrested at least 13 people who had chained themselves to the entrances of the police building at 455 Seventh St. starting around 7:30 a.m., and who are facing charges of blocking a public building and resisting arrest per police.

The glass door to one entrance was broken by police tools while officers cut the protesters free, police spokeswoman Officer Johnna Watson said. The group is "extremely well organized" and has been communicative with police, Watson said. But since the police headquarters is a public safety building, the ability to access it is important, she said.

Protesters had also blocked Broadway between Sixth and Seventh streets, where a group of activists locked themselves together with PVC pipes. Officers were in the process of moving the protesters off of Broadway and arresting them as of shortly before 10:45 a.m.

A protester also climbed up the flagpole at police headquarters to put up a flag that said "black lives matter." The protester remained perched on the flagpole late Monday morning.

Authorities advised motorists to avoid taking Interstate Highway 880 ramps in downtown Oakland, as well as the Posey Tube between Oakland and Alameda, as a result of the protest.

Protesters cited the recent deaths of Michael Brown in Ferguson, Missouri, and Eric Garner in Staten Island in New York as examples of police brutality against unarmed black men.

After grand juries declined to indict the officers involved in both deaths, protests have sprung up nearly every day the past few weeks in Oakland, Berkeley, San Francisco and elsewhere in the Bay Area.