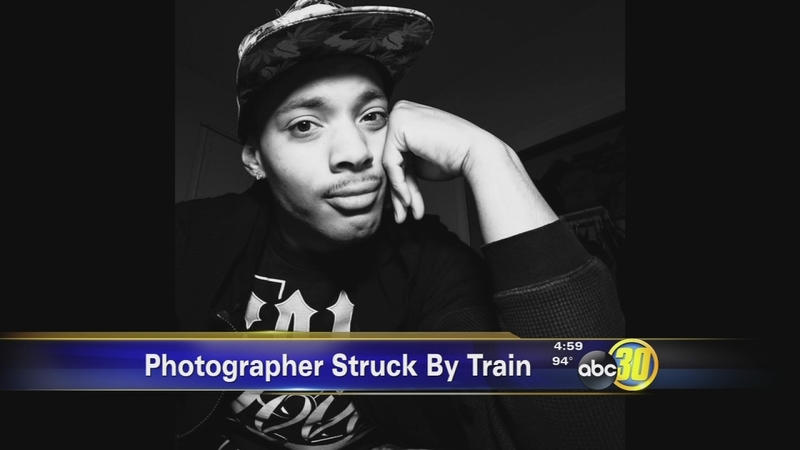 FRESNO, Calif. (KFSN) -- Friends are remembering a young photographer who was hit and killed by a train in Downtown Fresno. Police say 25-year-old, Christopher O'Guinn was taking pictures of a model on the tracks and didn't know the train was coming until it was too late.

A broken lens is still scattered across the train tracks below the Stanislaus overpass in Downtown Fresno. This Christopher O'Guinn lost his life and where he hit the shutter on his camera for the last time.

His friend, Kayla Aguayo said, "He was truly an amazing person and photographer."

On Thursday, O'Guinn was shooting pictures of a model in between the tracks. A train was in the background of the shot, moving south, while another was headed north, directly in the path of O'Guinn.

Lieutenant Joe Gomez said, "That engineer told the one going northbound, 'hey, there are people on the tracks,' he started throttling down, actually."

Lieutenant Gomez says the train also honked its horn but O'Guinn didn't hear the train behind him until it was too late. He tried to jump out of the way but it clipped him and killed him instantly.

"It's definitely a hard time right now," Aguayo said, "I think it's a hard time for all of us who knew Chris."

Aguayo says O'Guinn was drawn to the tracks. He was 25, still new to Fresno and his photography was just starting to take off.

"Really, just started putting his name on the map here in the valley," said Phil Perez, a photographer who also knew O'Guinn.

Still, O'Guinn left behind memories, pictures of people he knew, his friends and the places he loved.

"Chris is a talented individual," Perez added, "he created beautiful images for everybody to see."

O'Guinn's life was cut short but the images he captured will live forever.