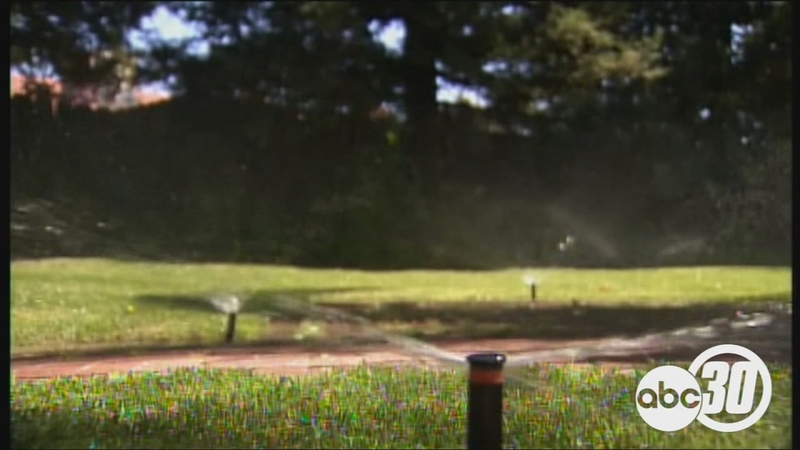 FRESNO, Calif. (KFSN) -- When was the last time you hosed-off your driveway or overwatered your lawn? It may soon be a crime in California to do it.

On Tuesday, February 20th, the State Water Resources Control Board will consider new rules to permanently ban practices that waste water such as:

Governor Brown originally set these wasteful water rules in place during the drought emergency as part of his "Make Conservation a California Way of Life" Executive Order, but those provisions expired last fall.

Again, if adopted by the Water Board, the conservation rules would become permanent on April 1st and part of the state code.

According to the Water Board, the goal is to "promote water conservation and prevent the waste and unreasonable use of water." Enforcement will rely on residents turning in violators.
More information on the proposal (PDF)

A lack of measurable rain and snowfall this season is triggering new calls for water conservation in California. Rainfall statistics from the National Weather Service show Fresno is only at 27% of normal for precipitation since July 1st of 2017.

At the same time, studies show water use is increasing since the Drought Emergency was lifted last year, especially in several Bay Area and Southern California communities.

State and Federal reservoirs are full from last year's historic storms, but there are fears that a parched year will drain the stored water and put the state in another dry hole. Under the California Constitution, The State Water Board has the authority to prevent the waste or unreasonable use of water. But there are some, especially here in the Valley, who believe the biggest water waster in California is the State Water Resources Control Board.

Fresno Assemblyman Jim Patterson is one of those critics. The Republican says "The most flagrant water wasters in this state aren't those who hose down their driveway every now and then - it's the State Water Board that flushed enough water down the drain in the last year to serve 25 million people for the next 20 years. They are the ones who should be caught, stopped and fined."

Who are they?
They are five of the most powerful people in California, setting water policy throughout the Golden State and implementing state and federal laws regarding water. Governor Jerry Brown appointed all but one of them and they believe like the Governor, that man-made climate change is driving the severe swings in California's weather.

Unlike the State Water Commission and according to their bios, none of them have a direct connection to agriculture, although Board Member, E. Joaquin Esquivel, worked on ag issues for former U.S. Senator Barbara Boxer and his grandparents were farmworkers. Board Member, Dorene D'Adamo, also worked on agricultural policy as a staff member for Representatives Jim Costa, Dennis Cardoza, and Gary Condit.

Meet the California Water Board members

The State Water Board is expected to approve the conservation rules and if the bone-dry weather continues, cities and water districts across the state may also call for water use reductions later this year.