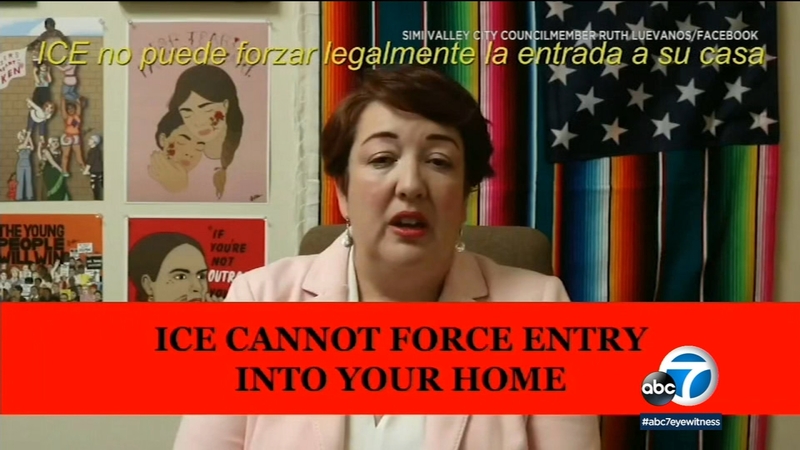 SIMI VALLEY, Calif. -- A Simi Valley councilwoman says she has received death threats after she made postings to social media advising immigrants of their rights if federal agents come to their door.

City Council member Ruth Luevanos made a Facebook post on July 13 advising immigrants about their rights, the day before what was supposed to be the start of a new nationwide series of immigrant raids.

"You do not have to open your door to ICE officials," she said in the post. "ICE cannot legally force their entry into your home."

The post has sparked outrage, in addition to a recall campaign. The councilwoman says she has received threats.

"Everything from being told I'm going to be deported to death threats," she said. "I was told I should be executed for treason by hanging."

Some critics say Luevanos' message, including her statement that Immigration and Customs Enforcement is targeting all families, is misleading.

"She's advocating lawlessness," said Simi Valley resident Jenniffer Jones. "You can't be doing this. These people went to court, they had their due process. A judge decided they cannot be in the U.S. any longer."

Her critics say her message is also inflammatory.

"I'm hearing news from our southern border, and right now the United States is in the business of running concentration camps," Leuvanos said in her post. "They're dehumanizing our refugee immigrants, our families that are coming here."

Jones argues that's not an accurate depiction of the situation.

"It's just wrong on so many levels because that's not what's going on," Jones said. "They're not being executed, they're not being forced into labor. They're being held."

Police have looked into the threat saying she should be killed but have not yet been able to identify the person who wrote it.