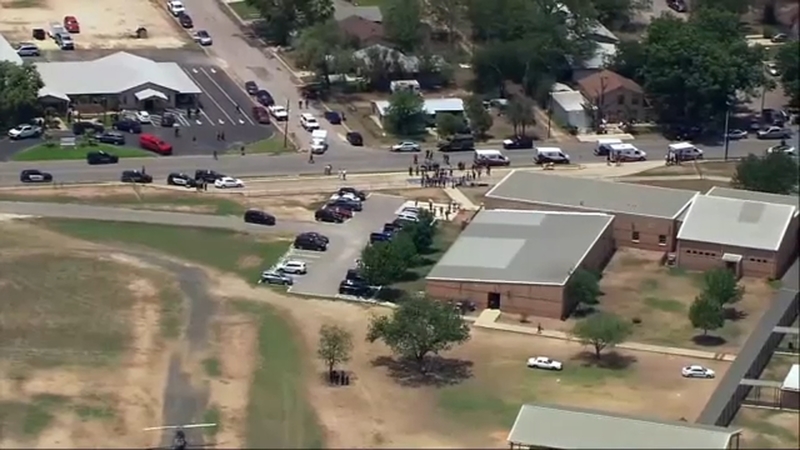 FRESNO, Calif. (KFSN) -- "Our children are innocent and really, they play no role in whatever political games are happening across the country."

Fifteen officers and one sergeant are stationed at the district's high school campuses, which Balderrama says he doubled down on when he first became chief despite police reform recommendations.

"If something like this does happen, how can you lock down the school immediately and have that layer of protection," he said. "Between an armed assailant who is coming in to hurt the staff and the children and the police officer. That is who we are."

The department is ultimately hoping to get ahead of the violence.

Balderrama says any threat, including those that circulate on social media, will be investigated and could lead to terroristic threat charges.

"This is not a game," he said. "This is a very serious situation we saw today (Tuesday) where many people lost their lives."

Tuesday, just hours after kids were killed by a gunman in Uvalde, Texas, Fresno police officers responded to Lowell Elementary in central Fresno where a child brought a BB gun to school and shot another student.

At the Fresno County Office of Education, preparations are underway for more safety training.

RELATED: Teacher killed in Texas school shooting identified: What we know about victims

In March, educators underwent behavioral threat assessment training. Local police departments, the sheriff's office and the FBI took part in teaching educators to identify risk signs in students to get them the right resources before violence occurs.

"We are able to train all school staff in conjunction with school psychologists on how to identify some of those behaviors that could end up being threatening behaviors," says Fresno County Deputy Superintendent Dr. Hank Gutierrez.

In a letter to parents Tuesday, Visalia Unified pointed out the new security fencing installed with a single point of entry during the instructional day at every school campus.

Clovis Unified released a statement, saying: "Today, we watched in horror and grief the events that unfolded in Uvalde, Texas. Our hearts are breaking for those lost, and for the families and educators whose lives have been forever changed by the actions of one person. Our best prevention of such tragedies lies with our parent community and the team of teachers, principals, and other staff on our campuses every day, and the hundreds of eyes and ears that they lend to securing our schools. In addition to extensive character development, social-emotional support systems, and safety plans we regularly practice drills (including lock down, fire, facility alert and evacuation drills) in order that our staff and students are well familiar with our procedures to immediately act to protect students and staff. A trained team of sworn police officers are also in place in Clovis Unified. Our district police force provides another line of defense to protect our schools, in addition to our valuable law enforcement partners in our local police and sheriff's offices."
Report a correction or typo
Related topics:
fresnoschool shooting
Copyright © 2022 KFSN-TV. All Rights Reserved.
SCHOOL SHOOTING
Uvalde school police chief resigns from city council
Grandmother of Uvalde school shooter released from hospital
Uvalde school police chief on leave after mass shooting
Uvalde City Council denies Pete Arredondo's leave of absence request
TOP STORIES
Gov. Newsom pardons woman who killed her pimp as a teen
Community remembers man killed in central Fresno house fire
2 killed, 1 airlifted after crash in front of Tachi Palace, CHP says
Crews reach 75 percent containment on Table Fire in Fresno County
Uvalde school police chief resigns from city council
40-year-old gang member arrested while on parole in Merced, police say
Texas inmate asks to delay execution for kidney donation
Show More
CHP urging safe driving during 4th of July weekend
1 killed in suspected DUI crash in Fresno County, CHP says
Abortion rights supporters hold rally in Visalia
Flames rip through central Fresno home, no injuries reported
2 arrested after chase in central Fresno, deputies say
More TOP STORIES News