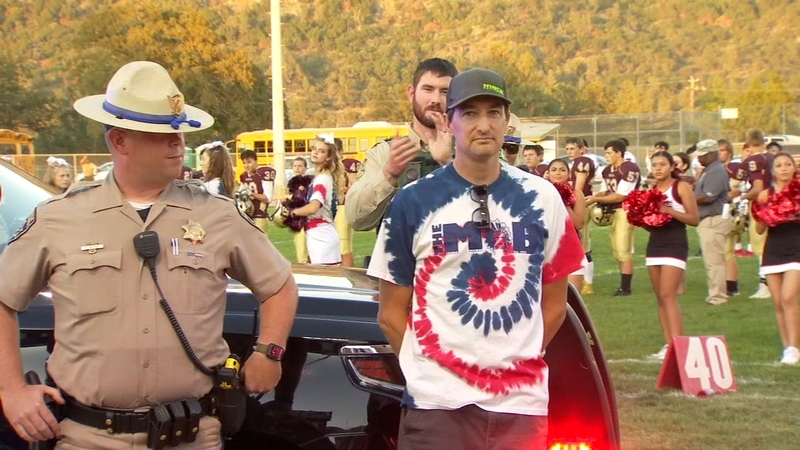 FRESNO, Calif. (KFSN) -- Minutes after the Sierra Chieftains ran through the banner before kickoff Friday night a special ceremony was held before the game.

As a helicopter circled the stadium, the sound of sirens from local first responders in Tollhouse could be heard a distance away.

But it's the person in a car, leading the pack, that was one of the main reasons everyone came together.

Back in July, he was shot in the back while responding to a call about a property line dispute.

That helicopter is the same chopper that landed at Community Regional Medical Center with Erickson.

A life-saving effort that helped him stand on his own two feet Friday night.

Erickson says his recovery since then has been long, "A lot of rehab, a lot of relaxing a little bit just rehab."

The overwhelming support did not go unnoticed by this nearly 20-year law enforcement veteran.
However, he says there are others who deserve it more than him.

"My partner right behind you he's the one he's the go-getter, justice here, there's a lot of good cops up here to serve and protect it's not a one-person show, it's just not," he said.

And people at the game recognized that, too.

The crowd honoring a man who many might say is bigger than football, but most importantly a man who truly gets just how close he came to an end of watch call.

"Anything in this moment that you're thankful for? I'm just thankful to be alive," Erickson said.