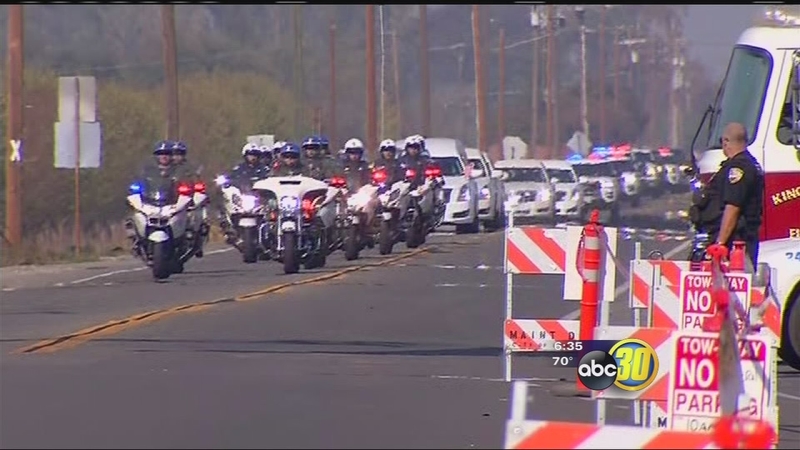 Other officers from local agencies patrolled the numerous intersections, ensuring a smooth ride for all from Fresno to Lemoore.

In Lemoore, Robert Baker and his family had a front row seat to the final leg of the procession. They came to pay respects to Sgt. Lucas, who most recently lived with his family in Lemoore.

Baker made sure to capture the moment, somber as it was, with a couple of cameras.

"It's really sad to see our law enforcement-- even thought it was an accidental shooting-- to get shot and pass away," Baker said. "I mean they're out doing a job that nobody else hardly does."

David Olds lives next to the cemetery where Lucas was laid to rest. He held an American flag as the procession passed.

"They got a hard enough job out there as it is, you know now (his) family's losing a member for something that was an accident," Olds said. "It's hard to go through."

And less than 10 minutes away, an entire school community continues to lift up the Lucas children, as signs of support still hang from their fence.

Those who saw the procession say it was powerful, and beautiful, but sincerely hope they don't have to see one again.

"I pray to god I hope all the rest of them stay safe out there, doing their jobs," Baker said.

It is estimated at least 500 people were at the cemetery Wednesday, after thousands showed up for Lucas' funeral in Fresno.
Related topics:
societylemoorekings countyfresno county sheriff departmentshootingfuneral
Copyright © 2021 KFSN-TV. All Rights Reserved.
KINGS COUNTY
Looking back at the ups and downs of COVID in Central CA
Kings County hopes for boost in COVID vaccinations
COVID vaccine hesitancy: A roadblock to herd immunity?
Johnson & Johnson vaccine arriving in Kings Co. next week
TOP STORIES
Merced teacher back home after battle with COVID-19
Looking back at the ups and downs of COVID in Central CA
24-year-old man shot in southwest Fresno, police say
What changes throughout Central California as state reopens
CA has reopened, but not everyone can go maskless
Suspect involved in standoff in Kings County identified
19-year-old arrested on arson charges for NW Fresno fires
Show More
What to expect from CA's reopening today
Newsom picks 10 winners of $15M to celebrate reopening
1 killed in shooting on Hwy 99 near Merced
Valley doctors discuss California's reopening
Valley travel industry shows signs of rebound as CA reopens
More TOP STORIES News