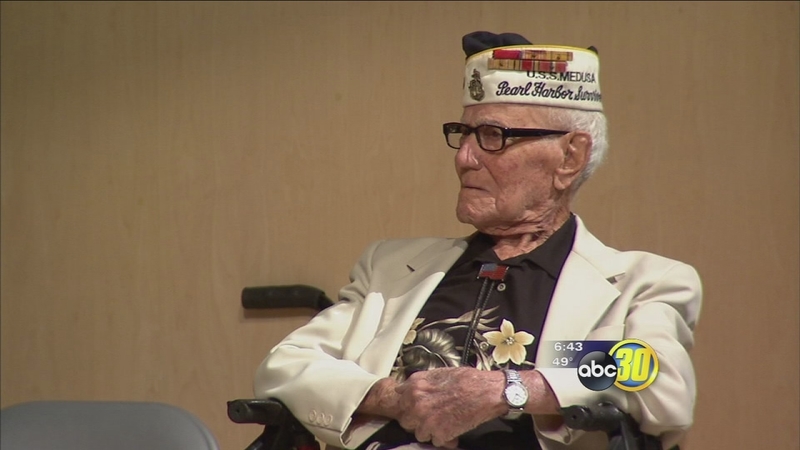 CLOVIS, Calif. (KFSN) -- Wednesday marked the 75th anniversary of the attack on Pearl Harbor that pulled the United States into World War II.

A couple of local survivors and veterans attended a commemorative ceremony in Clovis to honor those who died.

"We need to always honor the greatest generation that ever lived. We need to continue to do it even if they pass on," said Jim Anderson, Vietnam veteran.

Pearl Harbor survivor Joe Quercia of Fresno was a 19-year-old sailor aboard the USS Medusa when the Japanese invaded.

"I looked out the porthole and just had breakfast, my buddy was sitting there and I says, 'gee, we must be having gun practice on Fort Island or something,' I says, 'they even got red spots on the airplanes' and just about that time on the speaker, 'this is war, the Japanese have invaded us, this is war.'"

Quercia took the stage during Wednesday's ceremony to talk about Pearl Harbor and his six years in the Navy.

"Things are different now, but I'm proud of what I did and I'm proud of everybody that has to do with this bunch."

Seventy five years later Quercia is now part of the dwindling ranks from an attack that changed American history forever.