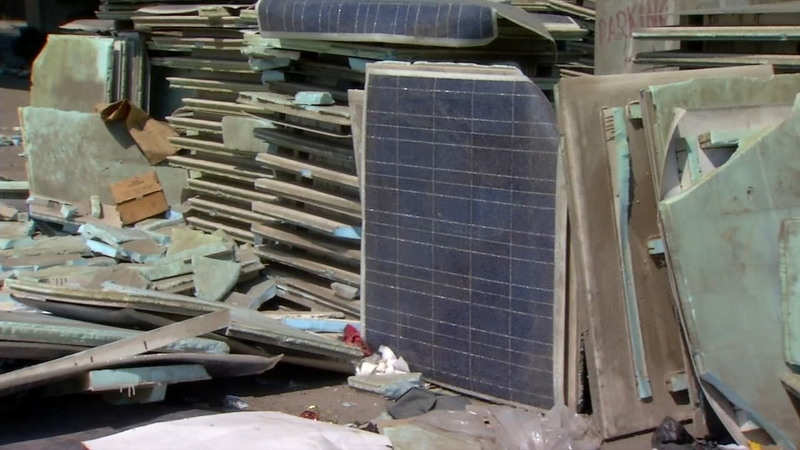 FRESNO, Calif. (KFSN) -- An eyesore of garbage has collected right next to the future high-speed rail corridor in downtown Fresno. Among the trash are stacks of solar panels that may have been illegally dumped.

These panels, once a symbol for purifying our energy, now represent a growing pollution problem.

The state of California says almost every single solar panel has some kind of toxic heavy metal in them, like lead, arsenic, or cadmium. They say to check with the manufacturer to check exactly what's in yours.

We tried checking the panels down by the HSR construction site, but they are so old the manufacturers have all been out of business for more than a decade.

Hazardous waste experts say heavy metals don't pose much of an immediate hazard, but extended exposure can lower energy levels and damage the functioning of the brain, lungs, kidneys, liver, and other organs.

"At the end of the day they do require special management, so you don't get the heavy metals through breakage and other things, getting into the environment," said Rick Brausch of the state Department of Toxic Substances Control.

There's definitely breakage in the stacks we found. Homeless people scavenged the recyclable pieces and used the panels to build little homes.

OK Produce installed the panels in 2003, making it one of the first California businesses to go solar.

The High-Speed Rail Authority took possession of the property and demolished the building in June 2017. A spokesperson tells Action News they've stored the panels here ever since.

"Right now, what I'd say is that from what you described, there's a potential hazardous waste violation going on," Brausch said.

He says state law limits this type of hazardous waste storage to 90 days.

This apparent violation may be just the tip of the toxic iceberg because you can't dispose of solar panels in California landfills.

"So what's happening is, we are seeing panels either stacking up, or we are seeing them go to places like Nevada where the regulations are different, and they just dump them in the ground," said Sam Vanderhoof, a solar installer who has opened a business to recycle solar, Recycle PV.