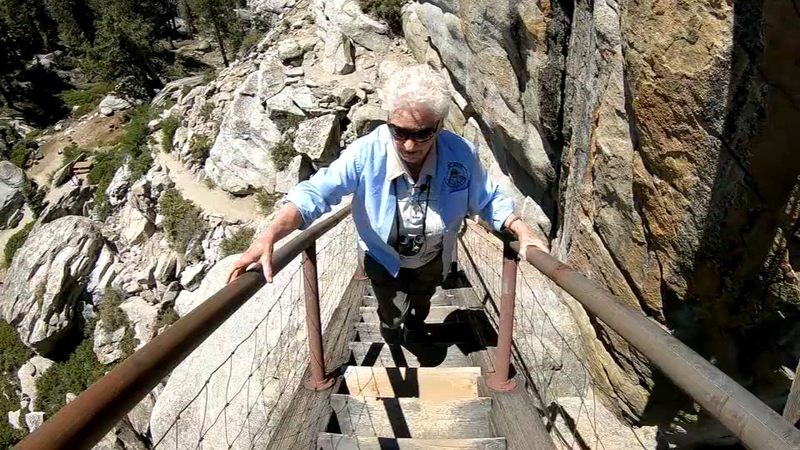 SEQUOIA NATIONAL FOREST, Calif. (KFSN) -- On June 6, 1944, American and allied forces stormed the beaches at Normandy, on what would come to be known as D-Day. It was the turning point of World War II.

D-Day is also the turning point in the life of Lea Dotters.

She was 18, fresh out of high school in Bakersfield and "Uncle Sam" needed her because most of the men had gone to war.

Because she loved the outdoors and could identify military aircraft, the forest service hired Lea to work as a fire lookout.

She became the first woman to handle the job at Buck Rock.

Lea reflected on that day in an interview with Action News, "No, I didn't know it was D-Day when I came up here, just happened to be, my D-Day," she said while laughing.

The historic Buck Rock fire lookout is anchored on a massive mountain of granite perched at an elevation of 8,500 feet, above the Sequoia National Forest.

It is a 300-foot climb to the top, a trip that Lea Dotters made for the first time on D-Day, "I didn't know what I was doing, or where I was going."

She hauled her gear up those switchback stairs, but couldn't see anything because clouds and fog had shrouded Buck Rock.

Lea went to bed on her first night in the cabin, feeling lonely and isolated.

But she woke with a very different feeling, saying there was, "Not a cloud in the sky, and I looked around this 360, and I was in the right place, I knew."

Lea learned to work the "fire-finder" in the middle of the cabin and handled all of the duties of the lookout.

She celebrated her 19th birthday at Buck Rock and felt right at home with her little dog, Bucky for companionship and her clarinet for entertainment.

"You should have heard the concerts I gave out of here to the world," she said while laughing.

Now, after all these years, Lea is returning to Buck Rock, and at the age of 93, she's determined to make that long hard climb one more time up to the lookout.

She invited Action News anchor Warren Armstrong and photojournalist Sam Gill to come with her.


As she caught her breath at the stair landings, Lea remembers the mountain landmarks from her youth, "You know, the Great Western Divide, the Kern River is beyond that."

When Lea walked up 172 stairs and into this cab for the first time in 1944, she had no idea she was blazing a trail for other women who wanted to be fire lookouts, firefighters, and park service employees.

In recognition of her trailblazing role, a picture of a young Lea Dotters is always in the lookout with Mich.

When Mich saw Lea climb those stairs again after all these years, it brought tears and an immense appreciation.

"Thank you, because really, so many women have gone after you, but none before," Mich said to Lea.

Lea is now a great- grandmother, and she also leaves a legacy to her family. Her son, Dick Dotters, thinks he was about five or six when his parents first brought him to Buck Rock.

"It was a stairway to heaven," said Dick. "As a little kid that age, you don't know where your parents are leading you."

Dick describes his mother as "the rock" of their family, passing on her love of the outdoors, "We're so blessed to have a mother that is not only nurturing and caring but such an adventurer."

She worked at Buck Rock until Halloween, when it closed for the season in 1944.

Lea still remembers those who doubted her mettle.

"You proved them wrong," Warren pointed out.

Lea went on to work for the Sequoia National Forest District, became a licensed private pilot, and wrote a book about exploring the southern Sierra as observed from the Buck Rock Fire Lookout.

In 1999, she became the first secretary of the non-profit Buck Rock Foundation and served on the board of directors until 2014.