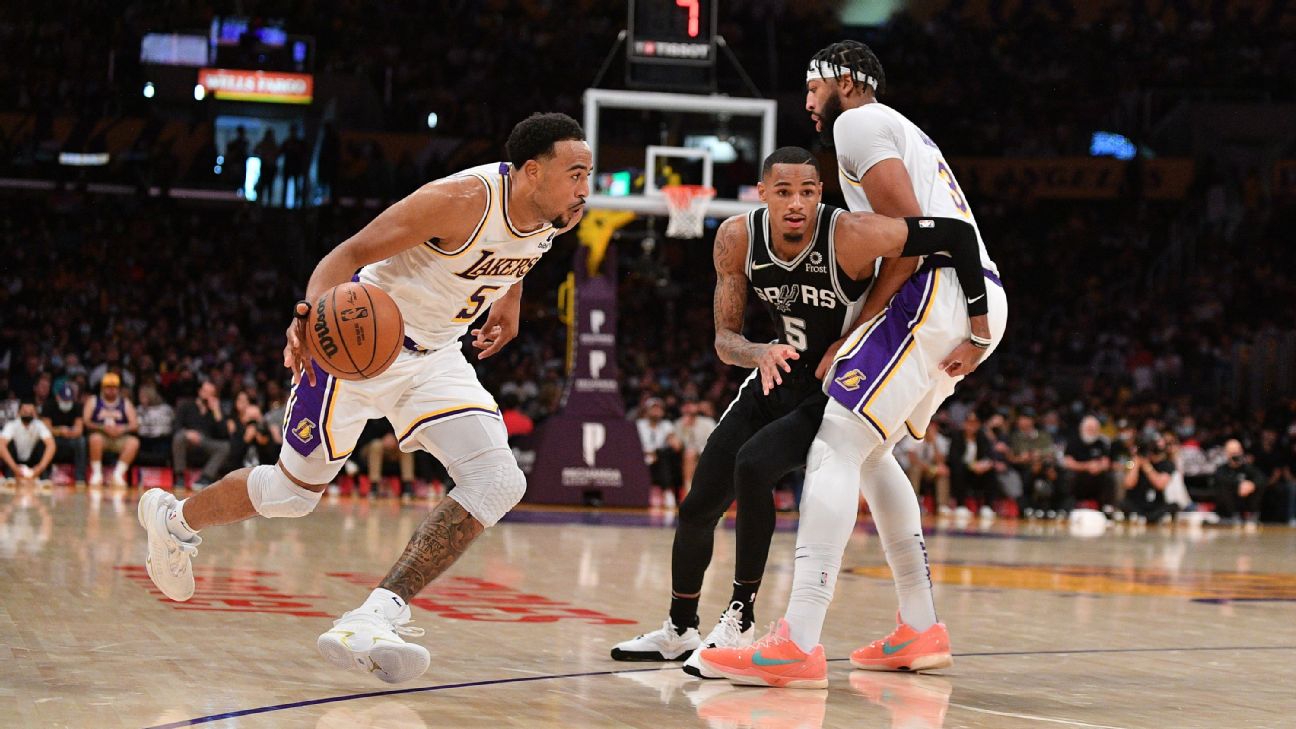 LOS ANGELES -- Anthony Davis "imposed his will" and Talen Horton-Tucker reintroduced his skill as the Lakers bounced back from a disappointing loss to beat the San Antonio Spurs 114-106 on Sunday.

Davis scored 27 of his game-high 34 points in the first half, accounting for his biggest scoring half since December 2019, and added 15 rebounds and six assists. Horton-Tucker, who underwent surgery to repair ligaments in his right thumb during training camp, played for the first time this season and scored 17 points on 7-of-14 shooting, rewarding coach Frank Vogel for putting him into the starting lineup.


The pair helped the Lakers respond after they were outscored 40-12 in the third quarter of Friday's home loss to the middling Minnesota Timberwolves.

"Anthony really imposes his will on this game," Vogel said of Davis. "I think he, probably more than anyone, was unhappy with how last game unfolded and he was intent to impose his will."

L.A.'s star big man turned his focus to Horton-Tucker, who along with Carmelo Anthony gave the Lakers a new-look starting lineup alongside Davis, Russell Westbrook and Avery Bradley. Kent Bazemore and DeAndre Jordan, who had been regular starters this season, did not play at all.

Horton-Tucker, who signed a three-year, $32 million extension with the Lakers in the offseason, had one of the biggest buckets of the game when he scored on a finger roll with 2:14 remaining in the fourth quarter to put L.A. up by four and give his team some breathing room after the Spurs had cut the Lakers' once-14-point lead down to two.


Vogel would not commit to whether the 20-year-old Horton-Tucker would remain in the starting lineup but vowed to continue to find playing time for him.

Vogel said he hopes Horton-Tucker can guard the opposing team's best perimeter player on a regular basis, and even though he had a steal and a block and drew two charges on Sunday, Horton-Tucker said his defense can improve.

"I feel like I could've been a little bit better, but I had some good moments and I'm just happy for that," he said. "That's something I have to do this year, so I'm just trying to lock into it."

After dealing with a bevy of injuries through the early part of the season, the Lakers have started to get some good news on the health front. Beyond Horton-Tucker's debut, Wayne Ellington (15 points) scored in double digits for the second time in the past three games after missing the first eight games of the season due to a hamstring injury, and LeBron James, who has been out the past six games with an abdomen strain, appears to be close to a return.

The source said James is "progressing great" in his on-court workouts. However, Vogel said the 19-year veteran has yet to participate in a full practice or take part in contact drills.

L.A. hosts the Chicago Bulls in the second leg of a back-to-back Monday and then hits the road for a five-game trip through Milwaukee, Boston, Detroit, New York and Indiana.

"One day at a time, that's all I can tell you," said Westbrook, who finished with 14 points, 11 rebounds, 7 assists and 7 turnovers, when asked if the Lakers could be primed to finally put a run together. "We hope so, but just take it one day at a time, slowly get guys back and get into a rhythm."
Report a correction or typo
Related topics:
sportsespnnewsanthony davistalen horton tuckernbalos angeles lakers
Copyright © 2022 ESPN Internet Ventures. All rights reserved.
TOP STORIES
Loved ones grieve for Missy Hernandez at Fresno vigil
Tax filing season starts Monday. What to expect for 2022
Fresno's famous 'dancing teacher' appears on Ellen Show
5 tax changes that can boost your refund this year
Man hospitalized after shooting in northwest Fresno
Suspect opens fire at birthday party full of teenagers in Clovis
Fauci optimistic omicron will peak in February
Show More
Rescuers use sausage dangling from drone to lure runaway dog to safety
Arnold Schwarzenegger involved in multi-vehicle crash
Deputies investigating armed robbery at Tulare Co. convenience store
President Biden appoints Fresno leader to head USDA post
How a 73-year-old grandmother outwitted a scam artist
More TOP STORIES News