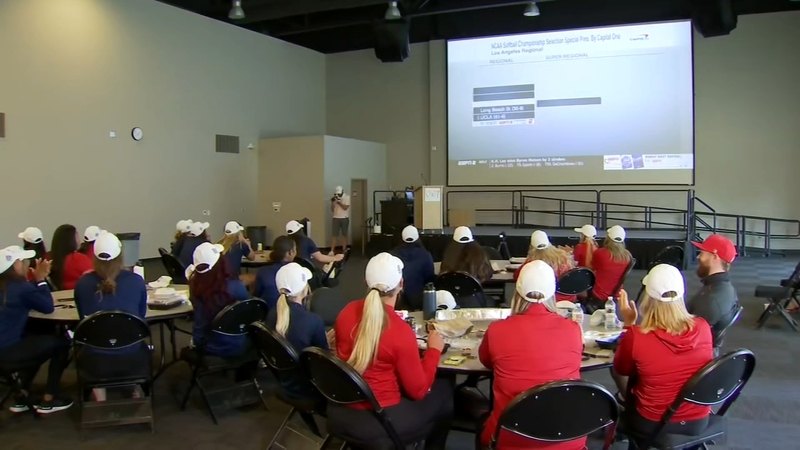 FRESNO, Calif. (KFSN) -- Back to where the season started.

The Bulldog softball team is headed down a familiar road if they hope to advance in the Super Regionals.

Fresno State softball took two of three in their season finale against San Diego State, but the hard work was taken care of last weekend.

The Bulldogs clinched the Mountain West regular-season championship, in doing so, earning an automatic bid into the NCAA Tournament.

They are heading back to the UCLA Regional, just like they did back in 2016. The Bruins are the second-ranked team in the country.

Minnesota and Long Beach round out the group.
The Dogs are set to face the Golden Gophers on Friday at 5 pm.

"Just very grateful, being able to keep playing with this team and taking it one foot at a time," says Hailey Dolcini. "You know, anything can happen. We beat Texas, who'd be UCLA last year, so I mean why not us in a sense and we're just ready to play this weekend."

"Just got to play every game like it's your last," says Miranda Rohleder. "I mean, why not us? Just go out and play as hard as we can and just play ball as we know how."

To make the celebration even sweeter, the Bulldogs would go on to sweep the postseason awards in the Mountain West, led by their two biggest stars.

Fresno State has won four out of the last six Pitcher of the Year awards.

She currently has an overall record of 21-4 and has been named to the USA Softball Collegiate Player Top 25 Finalist List.

Her 21 wins led the conference as she was truly in a league of her own.

Dolcini earned seven MW Pitcher of the Week awards this season and led the nation with 13 shutouts, including two perfect games to record the 16th and 17th perfect games in program history.

A freshman also put her stamp on the Mountain West on her way to a breakout season for the Bulldogs.


Outfielder Keahilele Mattson was named both the MW Player of the Year and the Co-Freshman of the Year.

Mattson became the backbone of the Bulldogs' offense in just her first season in a Fresno State jersey.

The freshman came alive in conference play, leading the Bulldogs in almost every offensive category.

She led the team in hits with a .426 batting average and recorded a hit in 32 games including 13 multi-hit games.