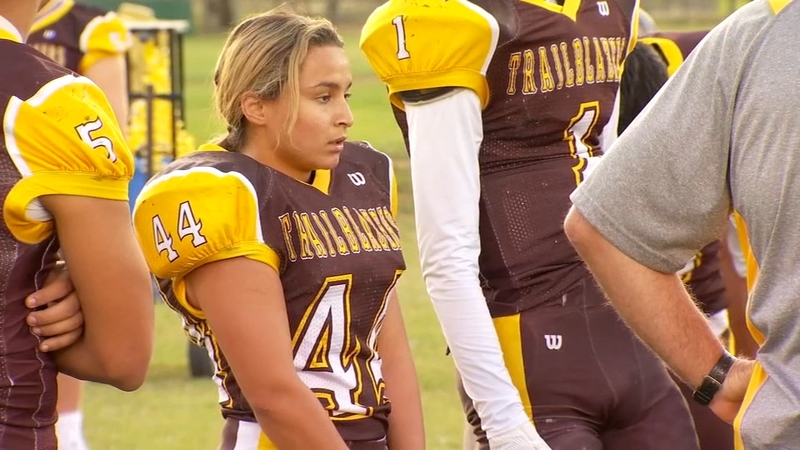 "I don't know how to explain it, it's definitely addictive," she said.

"It's a form of meditation for me, it's a release," she said.

This August, in her third season at Golden West she became the first girl to score a varsity touchdown in the Central Section.

The journey to get here wasn't easy.

"One day in summer school, one of the guys was like yeah you think you're all big and bad you should try out for football. I said I will, and he said you won't, you won't last a single day. The next day I signed up, two weeks I took his position," she said.

After facing animosity at El Diamante High during her freshman year, she decided to transfer and found a home at Golden West.

"She comes in and works. She doesn't care what anybody says or does she just comes in and does her thing. She's actually a leader in the weight room, we don't have to tell her anything, she just gets to work and leaves with a sweat," said Paul Preheim.

Angel credits her father as her biggest support system, who was fully on board when she told him at age 13 that she wanted to play football.

"Coach Kanawyer at the very beginning of the year said if you don't come out here and hit her, you're not doing her any favors and the team any favors. You guys have to hit her like everybody else. She went up afterward and thanked him for saying that,"

Angel's hard work ethic and dedication in the weight room have gained her teammates' respect. She has even inspired other girls at the school to follow in her footsteps.

"I hope I'm doing what in the future would be viewed as a good example, I would hate to be a role model for someone and let them down. I would never want to leave a bad trail, so yes I do think I picked the right school and am being a trailblazer," she said.

Angel scored her second touchdown of the season earlier this month against Mt. Whitney -- solidifying her place on the field.

"What was even better is when I turned around they were all there cheering for me and supporting from the sidelines. When I got over there they embraced me, and I was accepted and I was given approval," she said.

The trailblazer also competes on the school's wrestling team and is balancing academics as she decides on what college she wants to attend next year.

"When I think about how I'm not going to see another Friday night light game, I'm not going to have my brothers by my side. I don't care how many bad days I have, it's a family who's given me a lot of who I am today," she said.