Good Sports: Pilots bring the Bulldog spirit on every flight 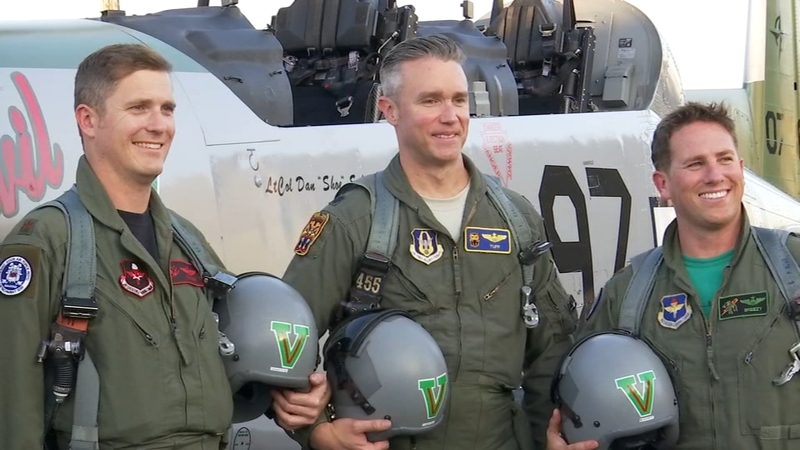 FRESNO, Calif. (KFSN) -- Military planes come and go through Fresno Yosemite Airport, but this past week saw a homecoming for a group of heroes.

"Spreading the Bulldog love, you know, paint the Valley red. We took the 'V' all the way from Texas and brought it back to California, so it's been halfway across the United States," said Lt. Col. Michael "Tuff" Thompson, F-22/F-15C pilot.

Lt. Col. Thompson has been in the Air Force for 16 years after graduating from Fresno State in 2001.

"It always feels good to come back home and back to the Valley," he said.

Thompson's love for Bulldog athletics was seen hours before the Bulldogs beat Boise on the blue.

After landing, Action News cameras caught him playing the Fresno State fight song over the speakers.

The green V was printed on the back of his helmet and the side of his T-6 plane.

But just as special to Thompson, the red Fresno State flag was seen in his cockpit.

"That's actually been with me around the world," he said.

Around the world for Thompson includes time flying in the Afghanistan War.

"Yeah it's been there and back. 120 combat missions of Afghanistan that flag has been, but it's good to wrap it all up and bring it right back home to Fresno," he said.

On this trip, he's returning from Sheppard Air Force Base in Texas with two other Fresno State alums for a pregame flyover.

"Being able to do a flyby has been a dream of mine since I left here just paying back as alumni," said Maj. Aaron "Breezy" Briesmaster, C-17/MC-12 pilot.

Joining the formation, the son of Joe Kaaekuahiwi, who played football at State in the 80s.

"Really awesome to flyover for my dad who's never seen me fly before."

The flyover came and went, but the memory will last forever.

"It's been 10 maybe 12 years since we've been together as classmates and now we're up there flying together. I think it looked good. The show was good."

After touching down, the group went on the field for a touching tribute.