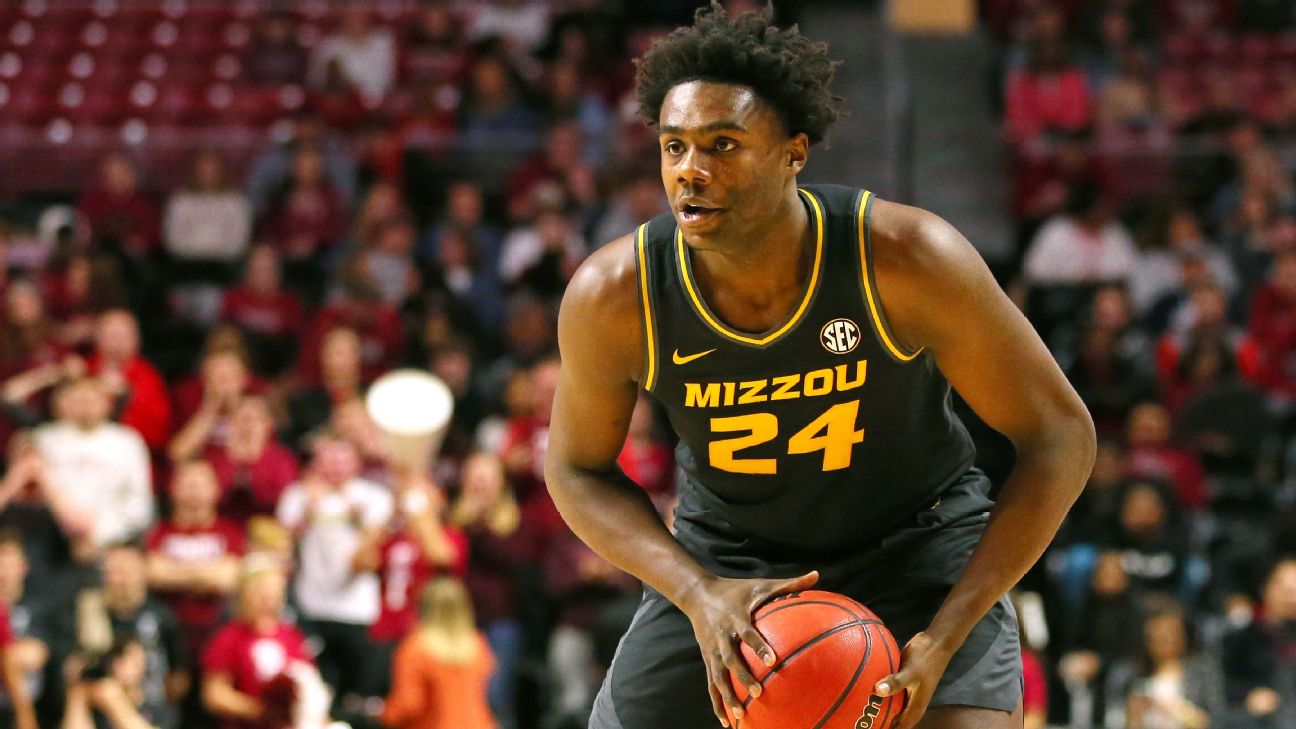 ESPN
By Myron Medcalf
For the current generation of college basketball players, Kobe Bryant was an icon. They dreamed of one day playing the game the way he did. He inspired them. They idolized him. He was "The Mamba" and they wanted to emulate his work ethic. In some cases, he was also the motivation behind their names. For college players named Kobe -- or some variation of the name -- the impact of the five-time NBA champion's life and death carried different meanings. Here are the stories of a few collegiate athletes who share the name.

Freshman forward; averaged 5.8 points and 3.7 rebounds in his first season with the Tigers

"My dad was a high school coach [Greg Brown, head coach at Lee High School in Huntsville, Alabama], and one of his players was getting recruited by Kobe Bryant's dad, former La Salle assistant Joe 'Jellybean' Bryant, years ago.

"He took him down there to visit in the mid-1990s and while he was down there, my dad went to one of Kobe Bryant's high school games. He was impressed. After the game, he saw Kobe's dad and he told him that if he were ever blessed to have a son, he would name him Kobe.

"Because of the name, I definitely had to play with a chip on my shoulder when I was younger. Some of my friends would say 'You ain't Kobe,' or they'd call me 'Fake Kobe.' I just got used to it and I just kept doing what I did. I kept killing.

"I reached out to my dad the same day. He was with his high school team. I knew I shouldn't call him in the middle of practice, but I did. He just couldn't believe it. And then he retold the story of how I got my name and why he named me after him.

"Because of the name, I feel like Kobe's death meant more to me. I had the Kobe gear and Lakers things. He's always been a part of me.

"I wanted to model my life after Kobe because he was this famous basketball player. He was just an inspiration."

"That's who I wanted to be like because we had the same name. Obviously, he's one of the greats. I tried to take the whole 'Mamba Mentality' and apply it to everything. It was just something that sparked my interest just because he was blowing up at the time. He was coming onto the scene around the time I was born and my parents liked the name, so that was what they went with.

"People would look at you and they sort of judge you off your name. I don't start the trash talk, but I can definitely finish it.

"I definitely thought I had to meet this standard and stay in the gym.

"You tell kids your name is Kobe and sometimes they'd say, 'Who do you think you are?' Going into high school, I was like 5-foot-2 and weighed about 125 pounds soaking wet. Nobody had really heard of me. Nobody knew who I was. I definitely had something to prove.

"On the day Kobe Bryant died, I had actually just gotten back from a road trip at like 4 a.m. and was actually taking a nap and my phone just started buzzing. My mom had texted me. Couple of friends had texted me. I didn't really want to believe it. I was devastated, to say the least. It definitely hit me hard. I definitely shed some tears.

"I honestly didn't realize how much I appreciated him and how much I talked about him on a daily basis. It was just crazy to think about. I had literally just bought his documentary, 'The Muse,' to watch while we were on the road. That day, I opened my computer and his face was on the screen.

"I just admire him so much. I'll just try to continue to carry the name on."

Senior midfielder/forward (soccer); started 18 games as a senior for the Division II Blue Knights and 66 of 68 over her four-year career

"If I was a boy, my name was going to be Kobe with an 'e.' My name isn't something people forget. But my mom was more of a Shaq fan.

"I played basketball until I was in eighth grade. But I had to quit because I couldn't shoot. I could dribble. But everyone expects you to be good because of the name.

"I went to St. Vincent-St. Mary's in Akron, Ohio, where LeBron James went to high school. Everyone was like, 'Why aren't you on the team?' I would say, 'Trust me, you don't want me on the team.'

"But you definitely have to be more than an average person if your name is Kobe (Kobi) Bryant.

"When I was 9 or 10 years old, I had a moment where I was like, 'Wow, I'm really named after Kobe Bryant.' But I liked it. I liked the notoriety of it.

"The day he died, I was in the shower. And I looked at my phone and I had three missed calls from my mom. I called her back. My mom was crying. It was really upsetting. I had to check other news sources.

"It was just weird because people would say my name afterward and I'd realize that they were talking about him, not me. I definitely think it was different for me. I think having the same name made his death more unique, in a way.

"I definitely drank some champagne [as a toast to Kobe Bryant's life] and watched the news that night.

"I feel more responsibility to hold up the name now."

Junior forward, averaged 2.7 points and 1.8 rebounds in his first season with NCCU in 2019-20 after transferring from Baltimore City Community College

"I wasn't named after Kobe Bryant. In Ghana, where I'm from, a male born on a Tuesday is named 'Kobby [COB-be].' It's my soul name.

"Growing up, I'd heard about Kobe Bryant, but I didn't know much until I started playing basketball. People would just go 'Kobe! Kobe!' when they saw me. So, in Ghana, I started watching Kobe Bryant videos. During that time, I started learning about Kobe, LeBron James, Kevin Durant and other players.

"When I came to America, everybody called me Kobe. I didn't correct them. I just stuck with it. I'm like, 'That man is great and I'm not on his level, but I can work like him.'

"I remember the first time I got a pair of Kobe shoes. I was 17. They were a gift. I went crazy.

"On the day he died, one of my cousins in Baltimore called me. He said he'd received a text that said 'Kobby' had died. He said, 'Are you good?' Then we realized it was the real Kobe Bryant, not me. I didn't believe it. I just prayed that it was not [true].

"I think he was an inspiration in a different way. No. 1, his work ethic. And the kind of man he was. He was a family man. I'm very close to my mom and grandma. I just wanted to be like him."

"Yeah, my mom, she named me after Kobe Bryant. She was a Lakers fan, but she wasn't, like, the biggest basketball fan.

"Growing up with the name Kobe? It was fun at times. But there was trash talk every now and then. There were definitely some people who wanted to challenge me just to see what I was all about.

"Back in middle school, it was actually crazy. During one game, I don't even know how this opposing team even knew my name at the time. But they were talking a lot of trash before the game. We ended up beating them.

"I definitely took a lot of pride in my name. He was my favorite basketball player. I always felt like I had to work hard, even though I know I'm my own person. He definitely made me want to work harder and be different.

"It's actually crazy. He died on my 21st birthday.

"My teammates had sent a picture of the article in our group chat and I was like, 'It can't be real.' Everybody just started talking about it, all day on my 21st birthday. That sums up how the day went. I tried to run away from it. That was all anyone talked about.

"I didn't have plans to celebrate because we still had practice. We had a game the day before and the day after.

"When the news came out, it started raining. That made it even more unbelievable.

"He has a great legacy. His death made me feel like I have to take it up another level.

"He reached so many people.

"If I could reach half the people he reached, that would be big."

"My parents were Lakers fans before I was born. Then they had the chance to adopt me and they thought I should be named after their favorite player.

"Growing up, on the basketball court you'd hear, 'You're not the real Kobe.' It just made me play harder, to be honest. I knew he wouldn't respond. He would just cook them.

"I always felt like, if I wasn't working my hardest, I'd be a disgrace to his name and him.

"On the day he died, I was in the car coming back from a restaurant with friends when I first saw the reports on Twitter. It was a rough couple of days after that. I don't know how to describe it.

"After he passed, I looked at myself in the mirror. I wanted to be sure that I was doing all I can to not waste anything. His passing meant no one is invincible.

"But when he died, I put my phone on 'do not disturb.' I had jerseys. I still have pictures of him.

"I want to live through him and be the best basketball player I can be. "

"My grandfather picked out the name for me when I was born. He died a couple years ago. And since then, that always stuck with me. That was important to me.

"My grandfather loved Kobe. He loved to watch Kobe play. Me too. Growing up, I always had the Kobe jersey, his shoes. I was Kobe down to my feet.

"That gives me the aspirations and the goals to be just like him. His relentlessness, his will to win, his heart was everything, all about basketball.

"My coach told us the news that Kobe Bryant had passed away during a team meeting.

"I know when I got the news about his death, I didn't believe it. I had to go through 20 to 30 people to try to get something else beside the real answer. Everybody was talking about it.

"I was in tears myself, because he was somebody I looked up to and wanted to be like and now that he's gone, it's like, man ... 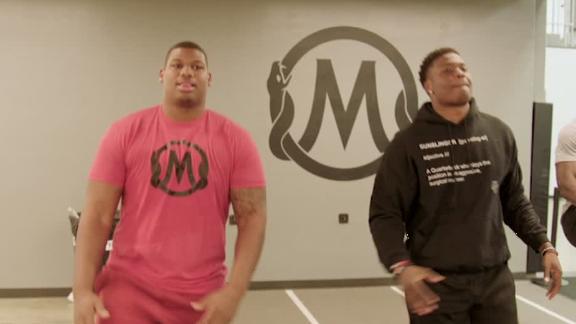