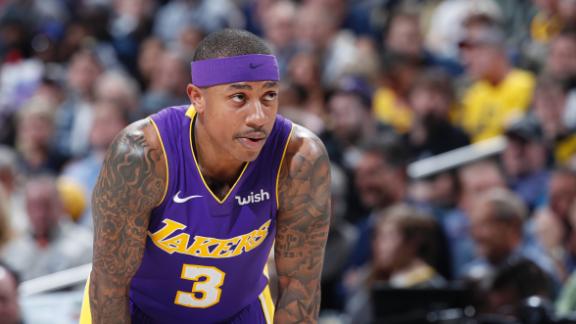 Despite a looming surgical procedure on his right hip, the Los Angeles Lakers continue to hold an interest in exploring a free-agent deal with guard Isaiah Thomas this summer, league sources told ESPN on Wednesday.

The Lakers announced that Thomas, 29, will undergo a scope on the problematic hip Thursday in New York and is expected to have an extended rehabilitation process.

In a statement received by ESPN, Dr. Bryan Kelly of the Hospital for Special Surgery in New York said that the minimally invasive procedure is to "clean up the joint of all inflammatory debris related to his injury from last season."

Beyond the recovery process on his hip, Thomas' future with the Lakers would depend largely on the franchise's success in recruiting Cleveland's LeBron James and Oklahoma City's Paul George into the organization's salary-cap space.

If the Lakers are unsuccessful in those recruitments, it would significantly increase the front office's interest in exploring one-year deals for the 2018-19 season to preserve future salary-cap space, league sources told ESPN.

Lakers coach Luke Walton and the front office have been encouraged by Thomas' fit with the team, and Walton feels he's had a positive impact on the younger players, team sources told ESPN. However, the examination of his health and recovery will be paramount for any team deciding whether to make a contractual commitment to him.

"The team's agenda always came first, and he never complained about it once," Walton said Wednesday. "... Him and Julius [Randle] had a nice connection going. I loved the banter between him and [Kyle Kuzma] out there on the floor. He was great. You go down the line, he affected all the guys that played minutes for us, the young guys."

Walton said Thomas wanted to be a starter but "never complained" about coming off the bench, putting the team's goals ahead of his own personal goals.

The Lakers are pursuing James and George with two max-contract salary slots and would need to renounce the rights to several players -- including Thomas -- to create the room to sign both All-Stars.

Because of the ongoing issues with his hip, Thomas is unlikely to get a significant long-term financial commitment on the free-agent market. The Lakers represent the possibility of a bridge season to show his ability to return to health and a high level of performance.

Thomas will spend time between his offseason home in Seattle and Los Angeles rehabilitating the hip over the next few months, and the Lakers have told Thomas that he will be welcome to use the team's practice facility throughout his rehabilitation program.

Thomas joined the Lakers as part of a trade deadline deal with Cleveland, where he had played only 15 games this season. He previously sat out eight months after electing against surgery for a torn labrum.

Brandon Ingram, who will return to action Wednesday after missing 12 games with a groin injury, said Thomas' leadership and ability to draw attention on the court will be missed.

"He has been a really good leader for us," Ingram said. "He has kind of been our vocal guy going into every single game, every single day, giving us pieces of advice how to be better."