LeBron James is dominant, but these are not last year's Warriors 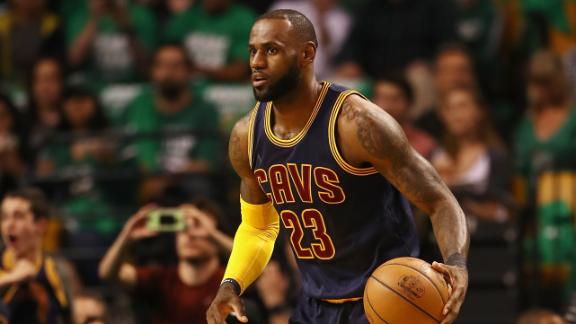 LeBron James has had an outstanding run in the 2017 NBA playoffs -- significantly "flipping the switch" and playing at a level well above where he performed during the regular season.

He is scoring more efficiently, getting to the line more often and committing fewer turnovers on the offensive end. On defense, as the youngsters say, LeBron is crushing it. His defensive rebounding percentage is up 3 percent, his steal rate is up 44 percent and his block percentage has nearly doubled. He has been great on both ends of the court, and he has done it while playing just over 40 minutes per game.

Clearly, all the commentary predicting he would turn it on come playoff time was correct.

With James leading the way, the Cleveland Cavaliers have correspondingly been more dominant during the playoffs than they were during a somewhat inconsistent regular season. During the regular season, the Cavs' average in-game win probability was 58 percent, meaning that on average, the Cavs were barely better than a coin flip to win a game. During the playoffs, their average in-game win probability has jumped to 72 percent. Riding LeBron's intensity, the Cavs have dominated their playoff competition.

Anyone paying attention has witnessed the way James and the Cavs have steamrollered through the playoffs, laying waste to every Eastern Conference foe that came their way. LeBron's problem, however, is that he now faces the Golden State Warriors. His flipped switch is probably not going to be enough to get past that juggernaut.

The issue starts with LeBron's teammates, who still have not quite found their own switches. Kyrie Irving's overall efficiency is down, as is his assist rate. Kevin Love has scored more efficiently due to a massive increase in 3-point attempts, but being stationed away from the basket has caused an equally massive drop in his work on the offensive glass, as well as a decline in his playmaking as seen through a decrease in the rate of shots he is assisting on. Tristan Thompson has picked up some of Love's slack on the offensive boards, and increased his scoring efficiency because of it, but that has been coupled with a decline on the defensive end, where his block rate has nearly dropped by half, and his defensive rebounding rate also has dropped.

Simply put, while James has gotten better in virtually every area of the game during the playoffs, his teammates just haven't. James has to be the best player on both ends of the court for the Cavs to win, and when he isn't, you get Game 3 against the Celtics (a 111-108 loss).

The concurrent problem, of course, is that Cleveland hasn't seen anything like this Golden State team (to be fair, it is pretty rare to see a team like the Warriors).

Golden State has an average in-game win probability of nearly 72 percent during the playoffs -- the same as the Cavs, despite playing a tougher set of opponents than the Cavaliers. No team in the vaunted Western Conference has been able to lay a glove on the Warriors. In fact, despite leading ESPN's Basketball Power Index by a wide margin at the end of the regular season, the Warriors' BPI has increased by about one point during the playoffs, roughly the same increase as the Cavs.

The Warriors are such an overwhelming force because they don't rely on one player to be the best on either end of the court -- never mind both ends -- from game to game, or even possession to possession. The Warriors have a seemingly unlimited number of offensive options, and two of them (Stephen Curry and Kevin Durant) happen to be two of the best three scorers in the league. Defensively, they have taken advantage of the extreme flexibility of the roster to create a unit that allowed 104 points per 100 possessions during the regular season (second in the NBA to the San Antonio Spurs), and they stepped it up during the playoffs to allow only 101.7 points per 100 possessions.

The Cavs are a very good team, particularly when James is switched on and demonstrating why he's in the conversation for the best player in the history of the game. He proved during the Finals last season that when he is on the court, there is very little that is not possible. It's just that the data doesn't like his chances -- BPI gives the Warriors a 28 percent chance to finish the perfect playoff run with a four-game sweep, and the Cavaliers have only a 6 percent chance of repeating as NBA champions.Last year, going into the finals, BPI gave the Warriors just an 11 percent chance to sweep and the Cavs a 24 percent chance to win the series.

LeBron's excellence has been enough to muscle the Cavs to the NBA Finals. But as he's about to find out, his individual excellence is not enough to offset the collective excellence of this Warriors squad.