Mike Trout's relentless quest to get even better 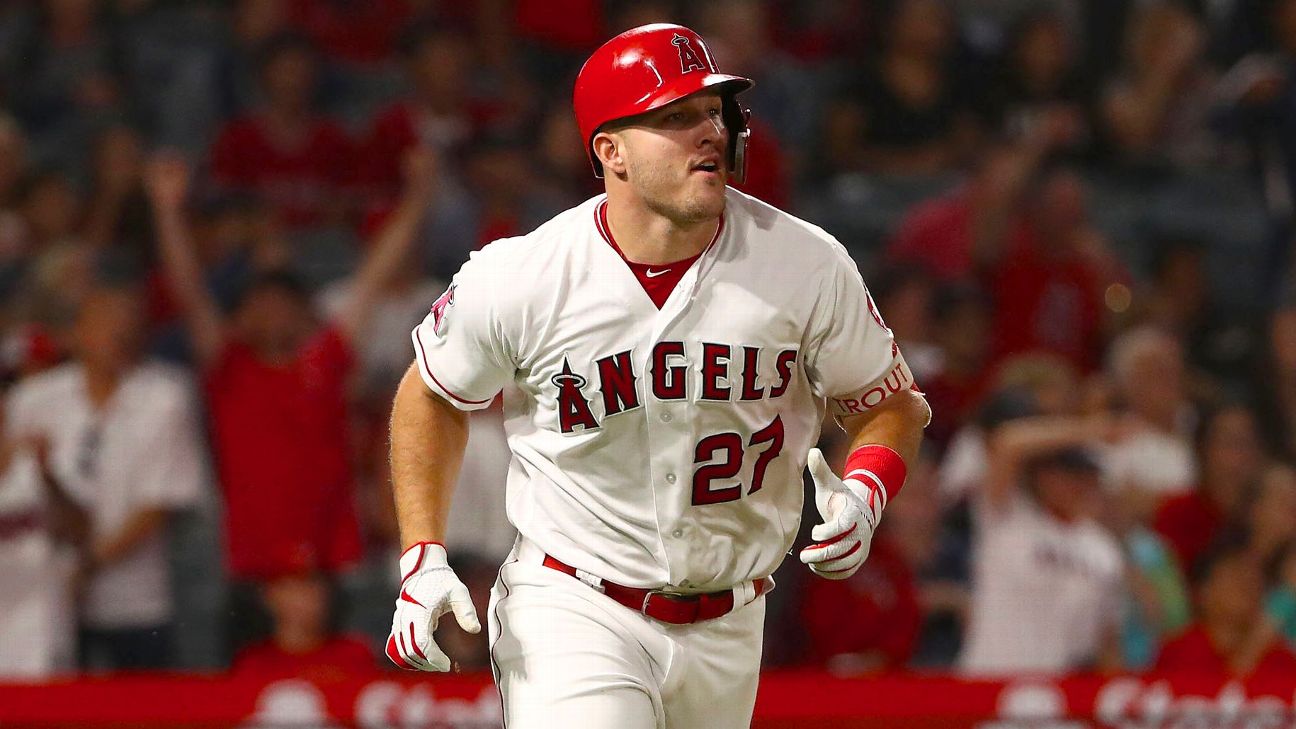 The game's best all-around player began 2018 with his mind set on turning himself into an elite defensive center fielder, a distinction that continually eluded him. He wanted to know what the advanced stats had to say about his first step, and he wanted to compare it to that of Jackie Bradley Jr., Kevin Kiermaier and Byron Buxton -- the best of the best.

On one afternoon in late February, Trout sat in a conference room at the team's spring training facility in Arizona with a handful of Los Angeles Angels coaches and executives, and -- for perhaps the first time in his professional life -- was presented with data that was unfavorable to him.

It paved the way for a season that Trout now considers his best yet, which is no small feat. He once again performed among the game's best offensive players, but he also turned in a defensive season on par with the most skilled at his position. Trout is a legitimate candidate to win his third MVP -- but may finish second for the fourth time because of Boston Red Sox outfielder Mookie Betts -- and he might just capture his first Gold Glove.

Once again, though, he will sit out the playoffs.

"It sucks," Trout said Saturday, moments before the penultimate game of his season. "Being out of playoff contention, early September, playing the games that mean something to other teams and not us -- it's not a good feeling. It's hard to stay focused and try to finish strong. It sucks saying this, but the games don't mean anything when you're eliminated."

Sunday's regular-season finale is expected to be Mike Scioscia's final game as the Angels' manager, ending a highly successful 19-year run that could someday send him to the Hall of Fame. It will be up to Eppler to replace Scioscia and construct the type of team Trout would want to stay with beyond his current contract, which expires in 2020.

"I got two more years, I guess, so we'll see," Trout, 27, said when asked about staying with the Angels into his 30s. "I haven't really thought about that yet. We'll see what happens in the offseason."

There has been speculation that the Angels might approach Trout about an extension this offseason, a commitment that would cost them at least $35 million a year.

"I don't know anything about any contract," Trout said. "I think it's just a lot of talk right now. I'm going to finish out strong and see what happens."

Entering Saturday's action, Trout's OPS (1.099) was on pace to be the highest in the American League since 2002. Baseball-Reference gives him 10.2 wins above replacement, which would make Trout the only player outside of Ted Williams to register three or more double-digit-WAR seasons in their first eight years.

But what makes Trout beam these days is his defense, a skill he honed by tracking balls off the bat during batting practice every day of spring training.

Trout is the only everyday player at his position not to commit a single error this season. Heading into the weekend, he was among the leaders in AL center fielders with seven defensive runs saved and ranked second with a 3.4 ultimate zone rating. He had also contributed seven outs above average, a range-based Statcast metric that grades outfielders based on catch probability. The previous two seasons, Trout's combined outs above average score was minus-5.

"I put my mind into something," Trout said, "and the results are there."

There are no publicly available metrics to adequately judge a player's first step, but internal stats are said to support the belief that Trout is a significantly better defensive center fielder this season. Scioscia took it a step further, saying Trout is "playing at a Gold Glove level" -- a compliment that suddenly seems to hold some validity.

The organization has consistently tried to surround Trout with adequate talent, but injuries have taken a major toll, the farm system has suffered, and at times the process has been flawed.

Trout, who has played in only three playoff games since his rookie year in 2012, said he was "very, very excited" heading into the 2018 season. The Angels re-signed Justin Upton, acquired Shohei Ohtani and entered with high hopes for their young, promising rotation. But injuries ruined their plans once more. They wound up sending a major league leading 25 players to the disabled list and used a franchise-record 60 players.

"It's frustrating, for sure, but we can't do nothing about it now," Trout said. "We just have to stay positive and take it into next year."

Trout doesn't go out of his way to watch postseason baseball, tuning in only in the rare times he finds himself bored on the couch. Most of his Octobers are spent fishing and hunting, mixing in the occasional Philadelphia Eagles game on the right Sunday. It's a way to escape, even though he prefers to engage.

Trout was recently talking to Albert Pujols about the increasing possibility of a tiebreaker game in the National League and found himself longing for that type of chaos.

"They gotta be having an unbelievable amount of fun," Trout said. "Just the big stage -- you want to be on there."
Report a correction or typo
Related topics:
sportsespnsciosciahalosmlbmike troutcenter fieldwarlos angeles angelsdefensive metricseppler
Copyright © 2020 ESPN Internet Ventures. All rights reserved.
More Videos
From CNN Newsource affiliates
TOP STORIES