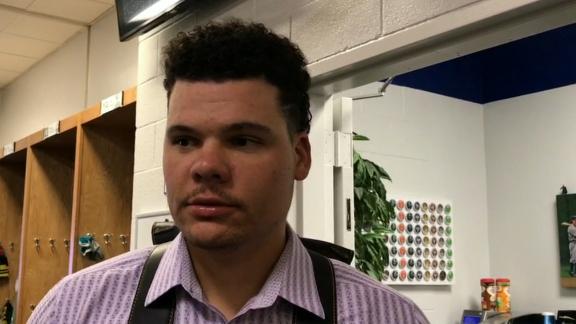 ARLINGTON, Texas -- Bruce Maxwell took to a knee in the Oakland bullpen during the national anthem before the Athletics' game against the Texas Rangers on Thursday night.

The catcher was warming up starter Sean Manaea, out of view from many fans and cameras. One fan near the Oakland dugout said "boo" in a normal voice, and a small number of fans booed when Maxwell batted in the second inning.

Maxwell has been the only Major League Baseball player to take to a knee, mirroring protests by NFL players against racial injustice. This was Maxwell's first road game since he began his protest last weekend.

A's manager Bob Melvin said before the game he expected the protest to continue because of Maxwell was committed to it.

Maxwell says he was booed for kneeling in bullpen
Athletics catcher Bruce Maxwell says he was booed in the bullpen and during every at-bat during Thursday's win at the Rangers, but it isn't really "a big deal" because people will criticize for anything.
Report a correction or typo
Related topics:
sportsespnoakland athleticsmlbanthembullpenbruce maxwell
Copyright © 2020 ESPN Internet Ventures. All rights reserved.
More Videos
From CNN Newsource affiliates
TOP STORIES