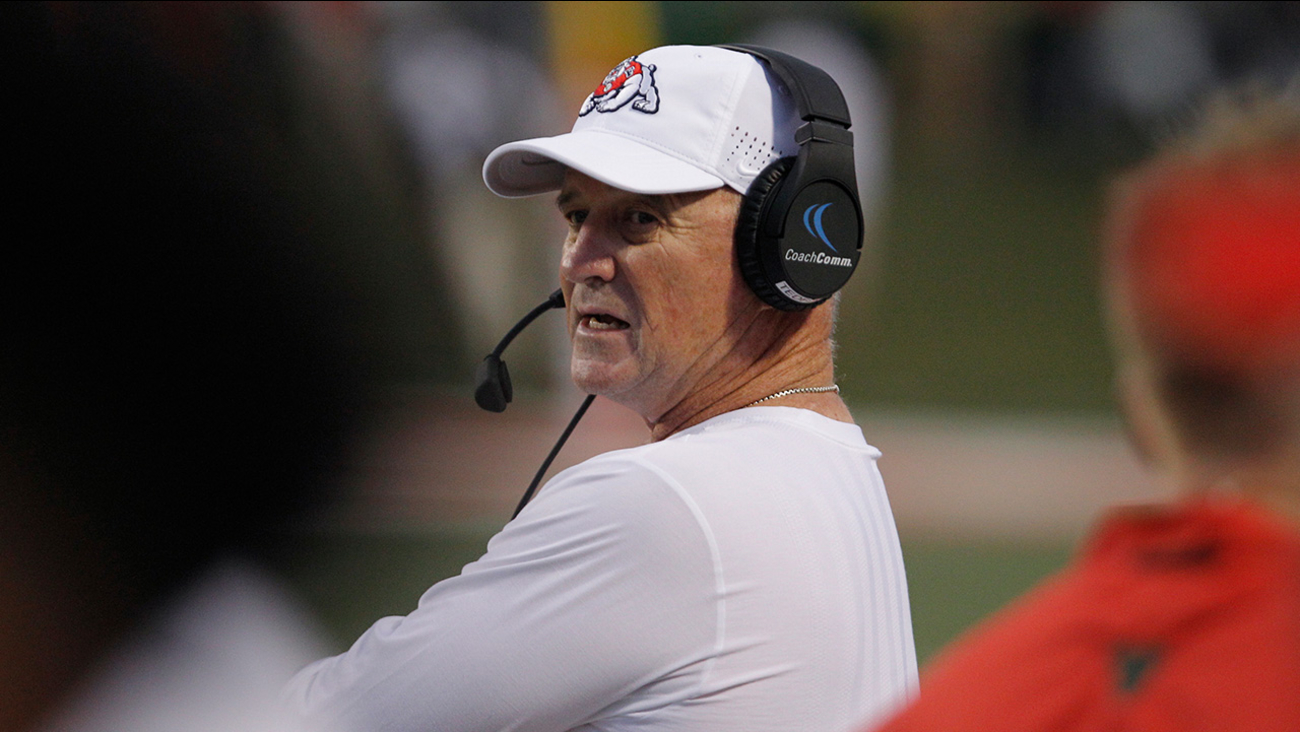 Fresno State coach Jeff Tedford talks on the headset against Idaho during the first half of an NCAA college football game in Fresno, Calif., Saturday, Sept. 1, 2018. (AP Photo/Gary Kazanjian)

FRESNO, Calif. (KFSN) -- Jeff Tedford has been a familiar face to Fresno State Bulldog fans not only as a coach but as a player for several decades.

Tedford resigned from his position as head coach during a news conference on Friday to address health concerns involving his heart.

RELATED: 'Now it's time to live': Tedford resigns as head coach of Fresno State football due to medical concerns

Tedford's career as a player and coach has spanned more than 50 years taking him all over North America.

Tedford got his start in college football at Cerritos College in Southern California where he played quarterback for two years.

After his two years at Cerritos, Tedford took his talents to Fresno State where he established several passing records and led the Bulldogs to a Pacific Coast Athletic Association conference championship.

One of the highlights from his time as a quarterback at Fresno State, Tedford led a come-from-behind victory in the 1982 California Bowl, beating Bowling Green 29-28.

Fresno State was down by 22 points in the fourth quarter and won with just 11 seconds left in that game.

During this time he also served as volunteer assistant coach at Fresno State under former coach Jim Sweeney.

Tedford decided to retire after his 1988 season with the Winnipeg Blue Brothers and pursue a career in coaching.

He got his first gig in coaching with the Calgary Stampeders as an assistant and spent two years with the team before heading off to college football back in the United States.

After leaving Canada, Tedford came back to his alma mater as a QB coach for the Bulldogs, where he was quickly promoted to offensive coordinator and held that position until 1997.

In his first year as the QB coach, he helped the Dogs defeat USC, 24-7, in the 1992 Freedom Bowl. According to the school, it was a victory that officially put Fresno State football on the map and showed that the Dogs could play with the "big name" schools.

In 1998, Tedford made the jump to the Pac-10 conference and accepted an offensive coaching position at the University of Oregon. During his time there, the Ducks went 38-10 finishing progressively better each year.

Due to his success at Oregon, Tedford accepted his first head coaching position at the University of California, Berkeley (Cal) in 2002.

During his first season, Tedford led the Golden Bears to their first winning football season since 1993, which earned him the honor of being named Pac-10 coach of the year.

That was just the start of his success at Cal, Tedford would go on to coach the Bears to a Pac-10 Championship in 2006 and its highest national ranking since 1951 coming in at No. 2 in the 2007 season.

Tedford left Cal after the 2012 season with the most bowl wins, conference wins, and games coached in Cal's history.

After his historic stint at Cal, Tedford made it to the NFL.

In 2014, he was hired as the offensive coordinator for the Tampa Bay Buccaneers.

Unfortunately, Tedford only coached three preseason games before he had to take a medical leave of absence due to a procedure that required to stents to be placed in an artery near his heart.

Tedford got back to the game after his medical scare by accepting a head coaching position in Canada with the BC Lions.

After the season, Tedford elected to exercise his option in his contract to resign and pursue opportunities in college football.

After just one year up North, Tedford headed back to college football and served as the offensive consultant for the University of Washington under Chris Petersen.

Everything would come full circle in 2017 when Tedford accepted the head coaching job at his alma mater, Fresno State.

Tedford was able to turn around the program in his first year leading the Dogs to a 10 win season, a far cry from the 2016 season where Fresno State won just one game.

In his first two seasons, Tedford went 22-6, the best two-year run by any coach in Fresno State history.