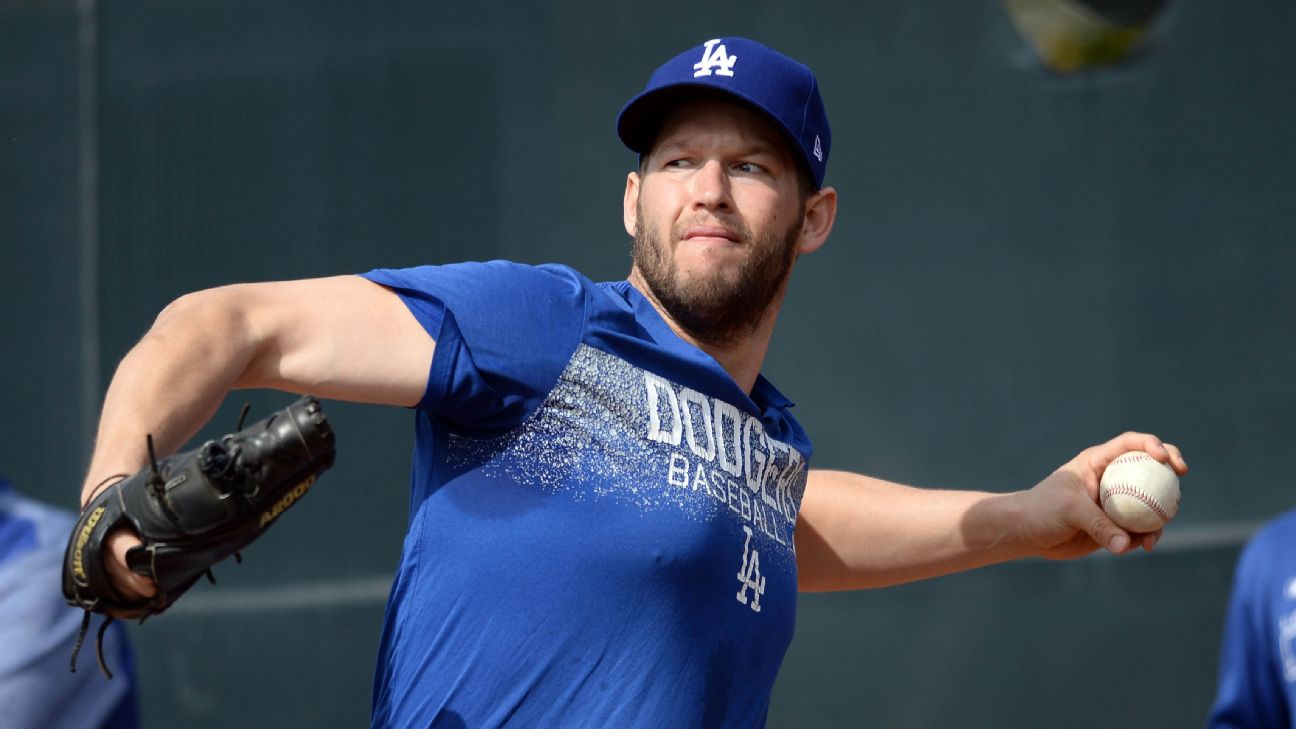 LOS ANGELES -- It was nine years, three teams and one career ago, but Brad Ausmus remembers the game -- May 17, 2010, on the road against the Florida Marlins. Clayton Kershaw carried a no-hitter through seven innings that night, but it was the way he went about it -- with a changeup, the one pitch that has given him fits throughout his career -- that made it so memorable.

Rick Honeycutt, now 14 years into his role as the Los Angeles Dodgers' pitching coach, remembers Kershaw throwing 17 changeups that start. PITCHf/x identified 11, a robust total nonetheless. Five of them generated swing-and-misses and none of them resulted in hits.

It was a success rate that never repeated itself.

Not long thereafter, Kershaw developed a devastating slider to pair with his fastball and curveball, a legitimate third pitch that helped turn him into a dynamo. The changeup faded into the background, partly because he couldn't command it and partly because he didn't require it. He toyed with it often, usually in the spring, then basically forgot about it as seasons progressed. Over the past five years, it appeared less than 1 percent of the time.

Dodgers president of baseball operations Andrew Friedman has stated often, somewhat playfully, that the back half of Kershaw's career will consist of him relying on changeups to dominate opposing hitters. It's Friedman's way of saying that Kershaw will always find a way, regardless of diminishing stuff, but the literal aspect might ring true.

As the velocity of his fastball diminishes and the break of his slider erodes, Kershaw might soon need the changeup as a pitch to tail away from right-handed hitters and provide a different look out of his hand. The Dodgers, who will welcome Kershaw back to their rotation for Monday's start against theCincinnati Reds, don't believe he's there just yet, even after a spring plagued by shoulder inflammation.

Dodgers manager Dave Roberts brought up Kershaw's ability to locate his fastball, slider and curveball, adding that "the sequencing part of it is plenty good enough for Clayton to be the elite pitcher that he is." Roberts also alluded to Kershaw beginning to work the outside corner against right-handed hitters, a strategy he went to more often last season.

"I still feel like he has better weapons," Honeycutt said, "better command of pitches that he's throwing right now."

Honeycutt relied heavily on sinkers during a pitching career that lasted 21 seasons. He threw pitches with natural pronation in his arm motion, which also made it easy to execute changeups. Kershaw, Honeycutt explained, throws from a high release point and with backspin, making it difficult for him to produce the arm-side movement that good changeups generate. Kershaw used the changeup as his third pitch for most of his first three seasons, but it never felt right.

From 2011 to 2015, Kershaw accumulated three National League Cy Young Awards and an MVP. He won 88 games, put up a 2.11 ERA, averaged 226 innings and was worth 37.6 FanGraphs-based wins above replacement (WAR), far more than any other pitcher. The success rate continued thereafter, but Kershaw's health began to abandon him; each of the next three seasons included time on the injured list with back problems.

The ERA (2.26), the WHIP (0.91) and the strikeout-to-walk ratio (7.56) all ranked within baseball's top three from 2016 to 2018, but the diminishing velocity, exacerbated last season, signaled looming trouble. Kershaw signed a three-year, $93 million extension five days after the 2018 World Series, then talked about how the deal was "a chance to prove a lot of people wrong" and expressed a desire to regain the velocity on a fastball that had sunk into the low 90s.

He has since backed off those ambitions in public settings. Instead, he talks about how much he has grown since then.

"There's a lot of things that have gone into last season to now that I'm not going to talk about," Kershaw said. "But I think what I've learned is that I can learn a lot more, because there's a lot of stuff that you can't take for granted. Not to say that I did, but there's a lot of things that I can learn from talking to people around here and different guys, just learning how to do the whole thing. Because in past years, I've been stubborn. I've had success, and I've wanted to do the same things over and over again. As you progress in your career, there's times when you have to make some adjustments. Maybe I haven't been as fast with that as I've needed to at times."

Kershaw has always admitted to being stubborn and has come to realize how essential it was to his greatness. Some degree of rigidity remains important.

"But at the same time," he said, "if you don't have success, or if you keep getting hurt or things like that, you have to change."

Kershaw, now 31, doesn't know what that change will look like just yet. He finds himself being more open-minded in all aspects of his job -- in the weight room, with the trainers, on the pitcher's mound -- and doesn't see himself chasing velocity.

"The results are what matter to me," Kershaw said. "I don't care about what I had in years past or what I have now. But I want the results, and I want to get people out as efficiently and as well as I have in the past. And I plan on doing that. I don't know if it's going to look different or not, but I plan on having the same success."

Kershaw still occasionally messes with the grips on his changeup and still includes the pitch as part of his between-starts bullpen session. Sometimes, if the scouting reports indicate that certain hitters are susceptible to changeups, he might even bring a handful of them into a game. Roberts has noticed a more concerted effort to develop that pitch, but even that will make only a marginal impact on its usage this season.

"To develop it, have it, get a ground ball, give a guy a different look, change speeds -- that's fair," Roberts said. "But it's still never going to be a big part of his repertoire."

But will it need to be? And, just as important, can it be?

Kershaw believes he can master the changeup if he prioritizes it.

"And the only way I will prioritize it is if the other stuff doesn't work," he said. "I'm not there yet."
Report a correction or typo
Related topics:
sportsespnmlbclayton kershawlos angeles dodgers
Copyright © 2020 ESPN Internet Ventures. All rights reserved.
More Videos
From CNN Newsource affiliates
TOP STORIES