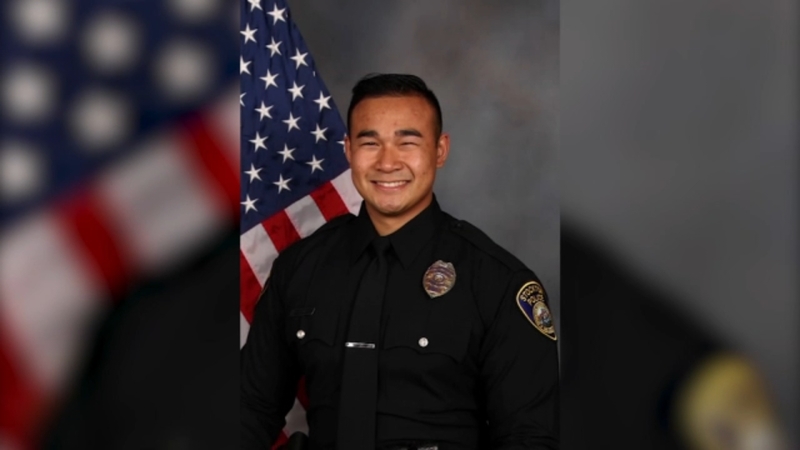 FRESNO, Calif. (KFSN) -- A police officer and a suspect were shot and killed in Stockton on Tuesday.

The Stockton Police Department announced on Twitter that the officer and the suspect were transported to a hospital after a shooting earlier in the day.

The officer has been identified as 30-year-old Jimmy Inn.

They both died from their injuries.

Stockton police said in a tweet that Inn was responding to a domestic violence incident.

He was hired in 2015 and was a member of Stockton PD's honor guard.

The suspect was shot and killed by another Stockton police officer.

It is with great sadness that we announce Officer Jimmy Inn was shot & killed in the line of duty while on a DV call this morning. The suspect was also shot & killed by another SPD officer. Officer Inn was hired in 2015 & was a member of our honor guard. #NeverForget pic.twitter.com/IGr6RpVvEt

Inn left behind three children and his wife, who is also a police officer, according to a post by the California Highway Patrol.

This deadly officer-involved shooting comes less than 24 hours after another in San Luis Obispo County, which also led to the death of a police officer.

Clovis police said they would wear black bands over their badges to honor the departments.

On behalf of everyone at the Clovis Police Department, we mourn with Stockton Police.

Chief Fleming has directed Officers to wear black bands over their badges to honor both SLOPD and SPD.
#LODD #EOW https://t.co/1vJdKm3CIb

The Tulare County Sheriff's Office was one of many local law enforcement agencies that expressed their grief.

Deputy Joel Wahlenmaier died in 2010 while serving a search warrant, Deputy Dennis Earl Phelps was killed conducting a traffic stop, and Deputy Erik Telen was murdered responding to a burglary.

"No call is routine in our business. You might go to the same call 1,000 times, but just once end up in a shooting," she said.

Both sheriff's officials and police said it's a tragic event and they look at their own protocols in place when it happens.

Despite the danger, both sheriff and police officials said their men and women are still putting their lives on the line for the safety of others.

"We just recovered 300 guns from gang members this year so every day our men and women are putting themselves at risk," said Mark Salazar with Fresno police.

Added sheriff Mims:
"Even though this happened and we know this could happen, there are still people willing to stand in that gap."

Along with police agencies, Governor Newsom also sent his condolences saying, "It is with heavy hearts that Jennifer and I extend our sincere condolences to the loved ones and friends of yet another fallen California hero. Officer Inn put his life on the line to protect those who cannot protect themselves and will forever be remembered for his selfless sacrifice and dedication."