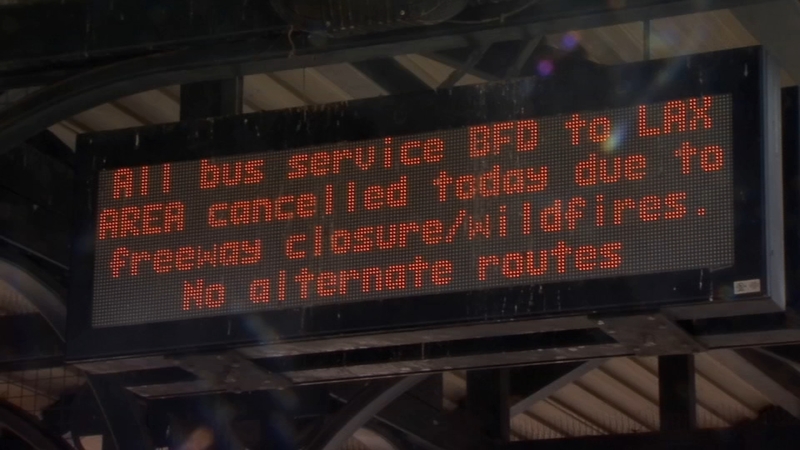 FRESNO, Calif. (KFSN) -- Travelers in the Central Valley are feeling the heat of the Saddleridge Fire.

Friday afternoon, California Highway Patrol officials announced the both directions of Interstate 5 are now open after being closed for hours.

UPDATE #SaddleridgeFire
NB I-5 is Open.

However, Amtrak has temporarily stopped bus services heading to the Los Angeles area.

The Saddleridge fire is continuing to grow by the minute forcing thousands to evacuate while shutting down multiple freeways, including parts of Interstate 5.

That means travelers in the Central Valley were left scrambling to find a way back home.

"I'll have to take Uber from here, but there's no way into LA so I have to find a way to stay here," said Los Angeles resident, Suwarna Rambukpotha.

The highway commonly used to get to the LA area from the Central Valley was closed shortly after the fire started on Thursday.

Drivers could take a detour, but that also included traffic jams and extra time.

On Friday, Amtrak announced their bus service from Bakersfield to LA was temporarily canceled because of the fast-moving fire.

Rambukpotha lives in Southern California and didn't know about the cancellation until Action News told her at the Amtrak station.

"I'm shocked because my son is waiting for me to get there so he can go to work," she said.

Signs at the train station are also alerting travelers about the disruption however, with bags in hand, Tyler Cales says the company should tell travelers sooner.

"It would've been nice to have been alerted ahead of time. I won't be able to go home for the weekend, and get the ticket refunded," he said.

Amtrak officials said they will gladly waive additional charges for customers looking to change their reservation during the modified schedule.