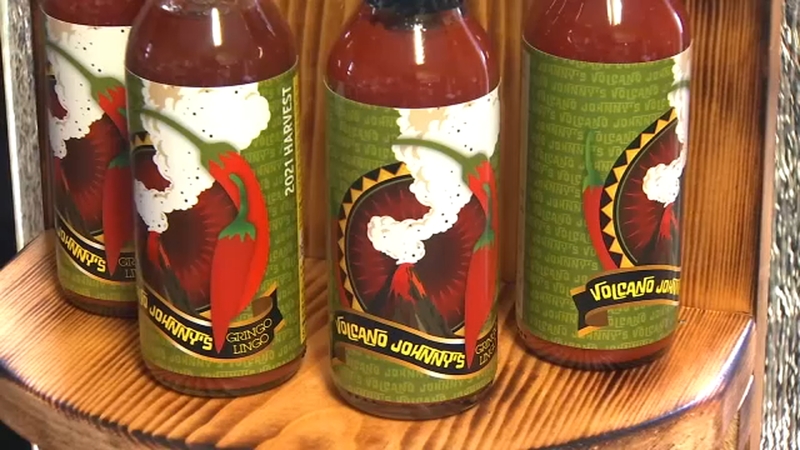 FRESNO, Calif. (KFSN) -- The Central Valley is heating up and it has nothing to do with the weather.

"I've been infatuated with smoke for years," he said. "We've taken fresh peppers, chopped them up so they absorb or have more surface for the smoke, then we put them in the smoker for six hours, grind them up and make the sauce."

The red and green jalapenos are grown to Chef Johnny's specification at Jim Moore's farm in Kingsburg.

"It's hand-picked, it's not a destructive harvest," he said. "The peppers are red ripe and then they get little striations on them called corking that indicates the pepper is mature."

With almost four decades of culinary expertise, Johnny is no stranger to finding flavors to please the palette -- something recognized while taking third in the mild to medium-hot sauce category at this year's Scovie Awards.

The competition recognizes the best fiery foods and barbecue products in the world.

"It comes on like a barbecue sauce and it's smoked with Nogal, which is pecan wood just like the Aztecs," Evans said.

But we can't just talk -- we had to try the hot sauce putting Kingsburg grown peppers in the national spotlight.

"We want it to compliment your food," Evans said. "If it pushes you away from your food, we failed. We can always make it hotter."

That he did. We tried all six of Volcano Johnny's premium hot sauces -- ranging from mild to hotter than a habanero.

Johnny isn't stopping at one award. The seven red & green sauces feature peppers roasted over charcoal, bringing out a flavor so unique they plan to bring it to next year's competition.

"They're late harvest, so they've been hanging on the plant for quite a while," he said.