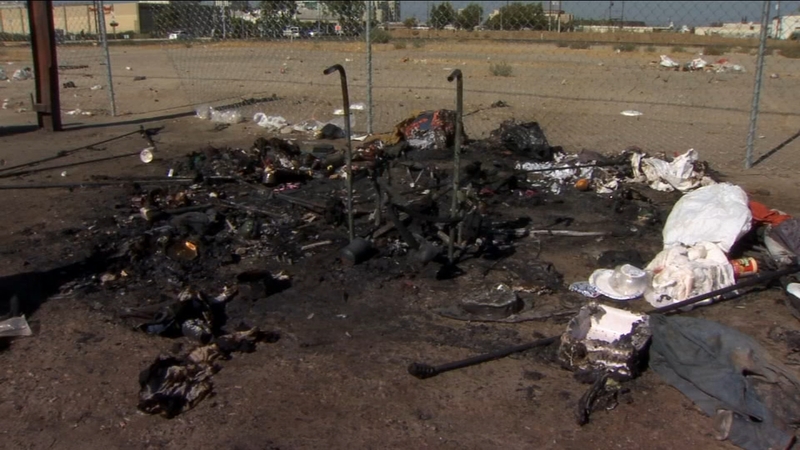 Woman in custody, charged for arson after setting homeless couple's tent on fire while sleeping

FRESNO, Calif. (KFSN) -- Friends say the victims were a homeless couple who had just moved onto the street.

Both of them suffered burns and were rushed to Community Regional Medical Center.

If surviving on the streets wasn't tough enough for the city's homeless, those camping on Ventura and G Street were jolted awake by smoke and fire Tuesday morning.

"I just heard screaming, and it was an ugly scream. It was the ugliest scream I had ever heard," said Kathy Cabral.

Kathy lives two tents down and woke up at 4 a.m. to find her neighbor's belongings on fire.

She says the married couple that lived inside had just moved here.

The husband who escaped from the burning nylon first was desperate to save his wife.

"He couldn't find her in there, but he could hear her screaming," said Cabral.

Firefighters immediately discovered the fire had been intentionally set.

They believe she is a transient herself.

"I don't think she made a statement as to her motive, but she did admit to igniting the fire," said Fire Investigator Jay Tracy.

Both of the victims are still recovering from burn injuries.

Friends say the couple lost everything they owned.

"Somebody just being in a bad mood can just do this to somebody," said Cabral.

The fire department says about 75 percent of the cases they investigate involve either the homeless, the mentally ill, or those who are on drugs.