From hiking 7,000 feet up Tehachapi Mountain to skiing down the slopes, Nick Burriel has taken his life back after almost losing it 7 years ago.
KFSN 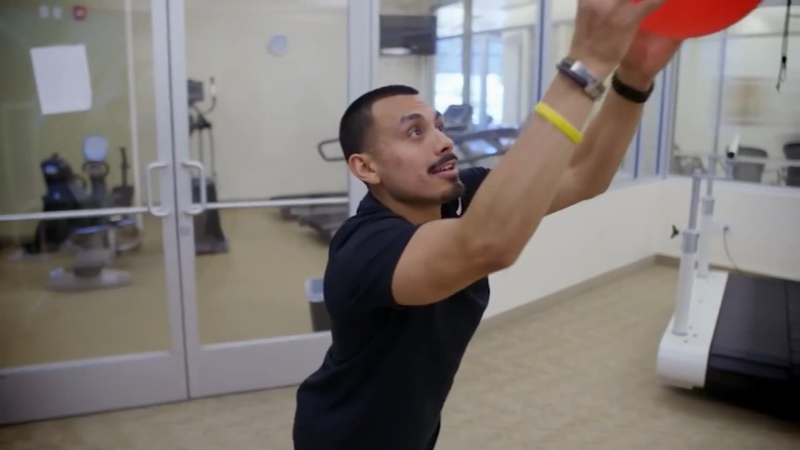 CLOVIS, Calif. (KFSN) -- In his mid-twenties, Nick Burriel was forced to start over and learn how to walk and talk again.

He's spent the last seven years overcoming his own challenges while encouraging other trauma victims.

Now, a statewide organization is recognizing his strength, compassion, and perseverance.

From hiking 7,000 feet up Tehachapi Mountain to skiing down the slopes, 32-year-old Burriel has taken his life back after almost losing it seven years ago.

"They gave me a 30% chance to survive my accident," Burriel says.

Burriel was forced to re-learn basic life skills after becoming the victim of a fight outside the Elbow Room in late 2013 that left him clinically dead for 25 minutes.

He spent over a year at the Center for Neuro Skills in Bakersfield to become independent again, learning everything from how to cook for himself to tying his own shoes.

Seven years later, he's not only re-learned the skills but speaks to other trauma victims about overcoming the obstacles while serving as a youth leader at Cornerstone Church.

On Thursday, his hard work will be recognized as he was chosen to receive the Consumer of the Year Award from The California Speech-Language-Hearing Association State Honors Committee.

Susana Rodriguez with the organization nominated Burriel after hearing about his miraculous recovery.

"Just that strength and grit I felt was just the embodiment of what this award means, what it entails," Rodriguez says.

Burriel says he's grateful for the award, but he couldn't have done it without his family, friends, and faith.

Burriel continues to face challenges, but says through perseverance, anything is possible.

"As long as you do the hard work, you can get through anything in your life," Burriel says.