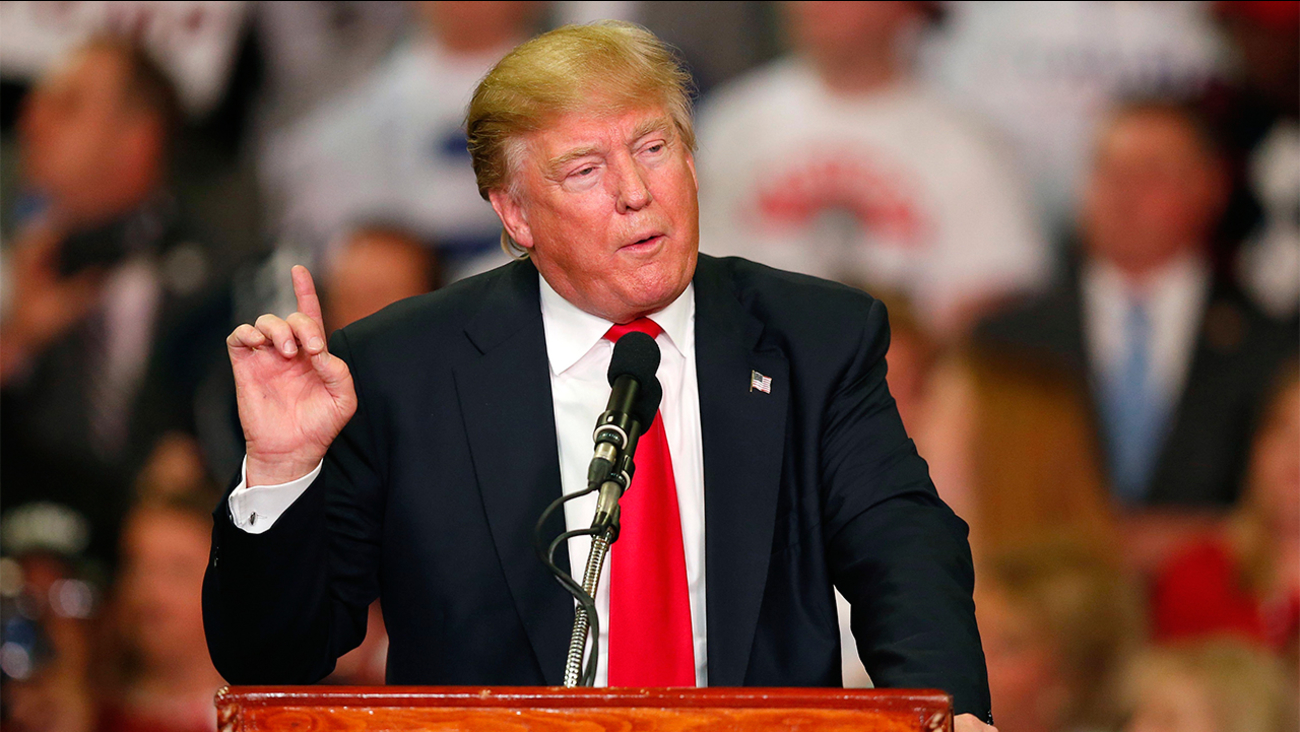 Tempers flared at the rally itself, but without the violence that marred Trump's event in Chicago a week earlier and with none of the candidate's usual goading of protesters from the stage.

For hours, about two dozen protesters parked their cars in the middle of the main road to the event, unfurling banners reading "Dump Trump" and "Must Stop Trump," and chanting "Trump is hate." Traffic was backed up for miles, with drivers honking in fury.

The road was eventually cleared and protesters marched down the highway to the rally site, weaving between Trump supporters who booed and jeered them.

Trump supporter Geroy Morgan, 62, made it to the rally but was furious at the demonstrators, some of whom still stood around after the event ended.

"We come here, the silent majority, to express our opinions," Morgan said. "They don't have any permits or rights."

Trump and Arpaio have formed a political alliance in recent months, and the billionaire hopes Arizona can serve as a model on how he could win in November. The tough-talking lawman is sheriff of Maricopa County, which includes Phoenix and nearly two-thirds of Arizona's population. He forced inmates to wear pink underwear and live outside in tents during triple-digit heat. The sheriff has endorsed Trump and introduced him at the rally.

In Fountain Hills, thousands gathered for the outdoor rally in the suburb where Arpaio lives. Officers with the sheriff's department were posted throughout the park, on rooftops and on patrol. Officers wearing bulletproof vests stood alongside a Humvee with a gun turret on top.

Trump told the crowd that he is "winning by massive landslides" and vowed to rebuild the military and build a border wall with Mexico. He drew cheers from the crowd when he vowed to protect the Second Amendment - which for pro-gun Arizona is a particularly important issue.

He never acknowledged the earlier blockade or the protesters in the crowd.

One man standing near the megaphone yelled to the protesters, "if you don't like America, go back to the country you came from." One of the protesters responded: "Go back to Europe."

Trump supporter David Nelson, 62, had to walk about four miles to the rally because demonstrators had blocked the road.

"You don't see me at Bernie's disrupting their crowd," he said, referring to Democratic candidate Bernie Sanders, who was campaigning on the Arizona-Mexico border on Saturday. "I give them respect."

Arizona votes Tuesday in a winner-take-all Republican primary as well as a Democratic race.

Some had feared that the event in Fountain Hills could devolve into violence reminiscent of last week's Trump rally in Chicago, which was canceled over safety concerns. The cancellation sparked isolated physical confrontations between Trump supporters and protesters. Confrontations involving protesters, Trump supporters and police have become standard at Trump rallies across the country. And Trump has incorporated reactions to them into his usual campaign speech.

Later Saturday in Tucson, Arizona, dozens of protesters made their way into another Trump rally, among them people carrying signs for the Black Lives Matter movement and someone wearing a Ku Klux Klan hood. They interrupted Trump as he spoke.

In typical form, Trump had the protesters kicked out, but urged the crowd of about 1,000 people to be nice to them.

Earlier in the day, about 50 protesters gathered outside the Phoenix Convention Center where Fox News host Sean Hannity was set to interview Trump. They held signs, played music and made speeches, calling Trump "despicable" and "a fascist." One of them, Salvador Reza, said: "He's working to create division."

Trump supporters trickled through protesters and security to attend - many wearing red, white and blue.

Kitson said the wall Trump vows to building all along the Mexican border may or may not be realistic, but it "is getting people's attention."

Several thousand miles away in New York, demonstrators also took to the streets to protest the Republican presidential hopeful.