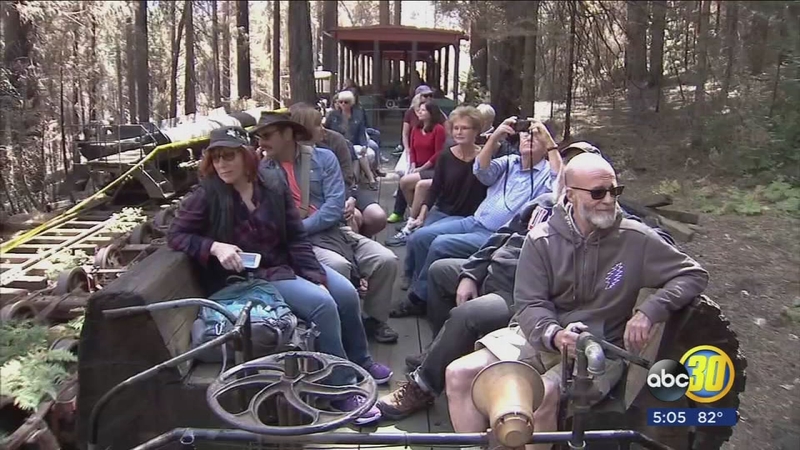 MADERA COUNTY (KFSN) -- The Sugar Pine Railroad is one of the biggest tourist attractions leading into Yosemite, and employees say they've been working around the clock to clean up after the Railroad Fire.

And now their trains are back on track and open for business after almost a month of silence, and the historic Sugar Pine Train is back on the rail track.

Dozens sat in the passenger cars as the train weaved through the Sierra National Forest on Monday. Jeff Clinard and his family made the trip up from Southern California just in time for the opening.

"We were on the internet making sure everything was actually opened before we headed up here," he said. "So we were figuring out whether we'd be able to make it. So, we're excited when it opened up again."

Massive trees are usually the main attraction, but this time charred railcars and trees burned by the Railroad Fire were some of the views.

Greg Haywood says they had to fire up the locomotive a day prior to opening. They also worked on cleaning up the rail cars and track while they were closed.

He says a fire break around the track prevented the fire from moving too close while fire crews prevented any more destruction.

"If it wasn't for them, those valuable pieces of equipment back there would be gone to history," he said.

Haywood says they're planning on a working story of the Railroad Fire into their ride's narration making the blaze a part of train's history.

With just a few weeks left until the end of the season, Haywood says they plan to stay open as long as they can.

"That's our main purpose here to make sure we have quality entertainment for families," he said. "That's what it's here for."