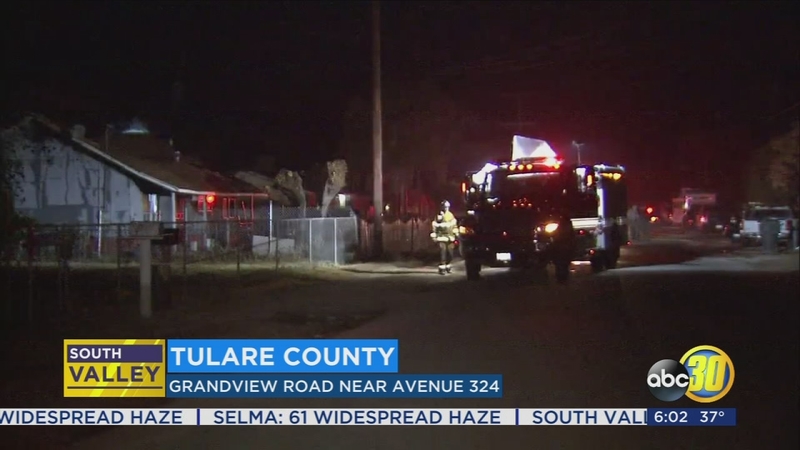 VISALIA, Calif. (KFSN) -- The Tulare County Sheriff's Office says the incident started with a fight between a father, armed with a gun, and his teenage daughter at their home just outside of Visalia.

She went to her grandfather's house across the street, and he then went to talk with her father (his son-in-law), identified as 35-year-old Juan Delgado.

Deputies showed up but did not know if Delgado was holding his father-in-law against his will.

"So we treated it as a barricaded suspect with the potential of a hostage situation," said Tulare County Assistant Sheriff Keith Douglass.

Douglass says they began communicating with Delgado over the phone.

His father-in-law eventually came out of the house, but Douglass says Delgado closed the door and locked it.

Delgado cut off communication with authorities after 7 p.m., so hostage negotiators and swat units utilized various forms of technology to try and see what was happening inside the home, including a robot that records audio and video.

The robot tried unsuccessfully to open the door of the bedroom where Delgado was believed to be, so authorities then tried a different method.

"The BearCat (armored vehicle) punched the hole in the window, we introduced video camera where we could instantly see the room was fully engulfed in flame and smoke," Douglass said. "At that time, perimeter units are now noticing that the fire is now running along the attic, it's an open attic area, and the house is very quickly becoming fully engulfed in flames."

Delgado was eventually found dead inside the bedroom, burned.

An autopsy will determine exactly how he died, but the sheriff's office believes he started the fire.

Court documents reveal Delgado was convicted of felony accessory after the fact in a 2003 Tulare County murder case.

But with the exception of a few traffic infractions, he hadn't been in any trouble with the law in recent years.