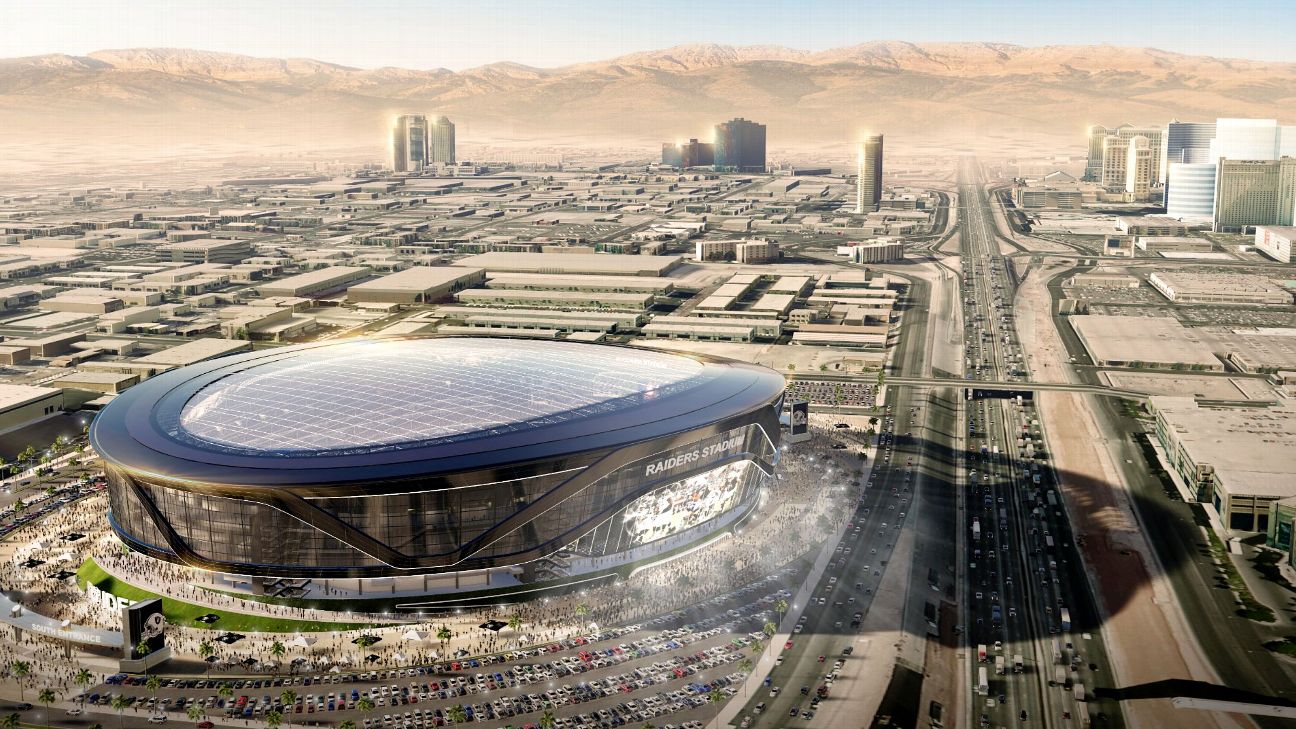 ESPN
By David Purdum
The future home of the Las Vegas Raiders has a founding partner.

Caesars Entertainment on Thursday announced a 15-year partnership with the Raiders and the Las Vegas stadium that is under construction and will play host to the first NFL franchise to call Sin City home in 2020.

Financial terms of the deal were not disclosed. The partnership includes a Caesars-branded owner's suite at the 50-yard line, Caesars entrance and drop-off spot as well as VIP perks, including tickets to home games.

"The Raiders are proud to welcome Caesars Entertainment as a founding partner of Las Vegas Stadium," Raiders president Marc Badain said in a release announcing the deal. "We are honored to align with a company that shares the Raiders' values of improving the local community and delivering exceptional customer service in creating this transformative project."

The Caesars-Raiders partnership is the latest in a flurry of deals between professional sports leagues, teams and gaming operators.

The Baltimore Ravens partnered with the Horseshoe Casino, a Caesars' property in Maryland, and the Dallas Cowboys have a deal with Winstar World Casino & Resort in south Oklahoma. Earlier this week, the New York Jets announced a partnership with MGM Resorts, which also has deals with the NBA and NHL.

This year, after a U.S. Supreme Court decision in May opened a path for states outside of Nevada to legalize sports betting, the NFL lifted its blanket prohibition on marketing relationships with casinos that have sportsbooks, as long as the sportsbook specifically is not advertised or promoted.

Earlier this week, Caesars signed sponsorship agreements with the Philadelphia 76ers of the NBA and New Jersey Devils of the NHL.

"Sports have long been a core part of the Caesars experience," Chris Holdren, chief marketing officer for Caesars Entertainment, said in Thursday's release "With this deep partnership, Caesars will become an essential part of the game time ritual for Raiders fans everywhere. From activations to exclusive experiences, fans of the silver and black will see Caesars as their home on game day."

Nehme E. Abouzeid, a Las Vegas-based marketing consultant who was the chief marketing officer for the Vegas Golden Knights in 2016, says becoming the first founding partner of the Raiders gives Caesars a significant leg up on its competitors in several ways, most notably the ability to grab a market share of VIP casino players and CEOs, who may hold meetings in Las Vegas each year.

"This is a major coup for Caesars," said Abouzeid, president and founder of consulting firm LaunchVegas, LLC, who also has worked with Las Vegas gaming giants Wynn and Las Vegas Sands Corporation. "Most people don't realize how multi-faceted these casino resorts are. There are seven lines of business under one roof: casino, hotel, retail, nightlife, food and beverage, entertainment, and meetings. They can activate their business in an arena on so many levels.

"By getting in first," Abouzeid added. "Caesars can map out the special inventory that it wants to use to elevate the customer experience."
Report a correction or typo
Related topics:
sportsespnnflcaesars entertainmentoakland raiders
Copyright © 2020 ESPN Internet Ventures. All rights reserved.
More Videos
From CNN Newsource affiliates
TOP STORIES