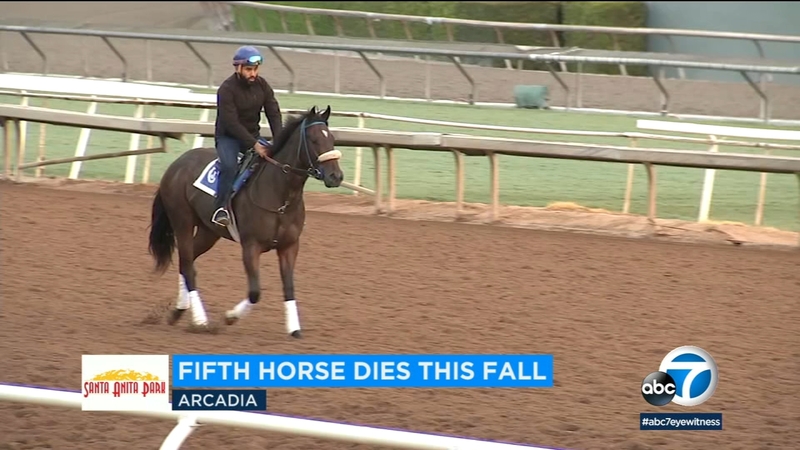 ARCADIA, Calif. -- Another horse has died at the Santa Anita Park race track, marking the 35th horse to die at the track since December.

Five-year-old race horse, G Q Covergirl injured both front legs while training Friday. The horse was euthanized on the recommendation of the attending veterinarian.

The People for the Ethical Treatment of Animals recommended that training and medication records of trainer Phil D'Amato's be released to the public in their statement:

"If horse racing ever needed a three strikes rule, it's now. Trainer Phil D'Amato's training and medication records need to be investigated and released to the public and the horses still in his barn should be thoroughly examined. G Q Covergirl was trained by D'Amato until June, when she was claimed by Doug O'Neill. D'Amato also trained Satchel Paige, who died on October 19, and Formal Dude, who died on June 8-the same day that G Q Covergirl was transferred to O'Neill. O'Neill also has a long record of medication violations and suspensions. When a horse dies, the California Horse Racing Board should suspend the trainer pending a full investigation. It won't bring back the horse, but it might prevent more deaths."

Santa Anita Park made changes to their rules including banning race-day medications designed to protect their race horses.

Gov. Gavin Newsom signed a law in June allowing the agency overseeing horse racing in California to immediately suspend licenses to protect the health and safety of horses and riders as a response to the rise in horse deaths at the park.

The race track has seen a significant drop in attendance since the controversial horse deaths.