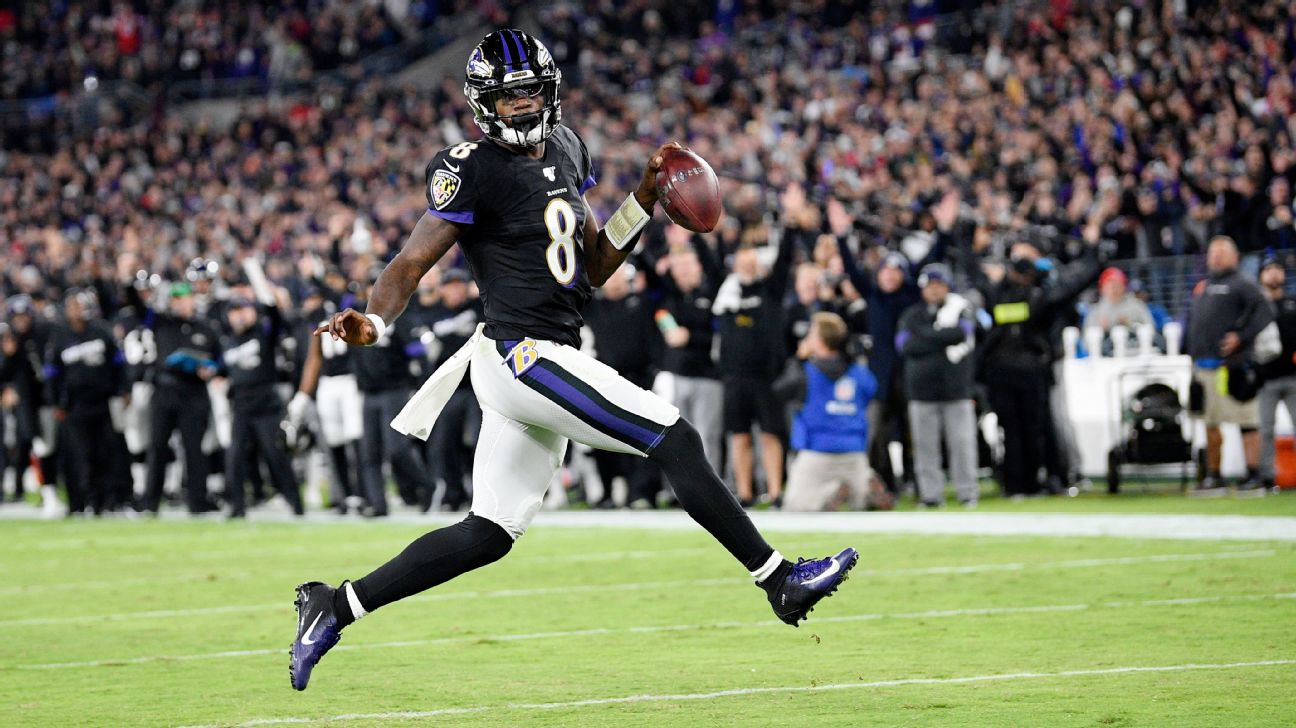 Not so fast, you Patriots. The Ravens managed to tighten the AFC playoff race Sunday night, handing the Patriots their first loss of the season and, at the very least, guaranteeing us a layer of genuine playoff intrigue during the second half of the season. The Ravens, Texans and Chiefs are all within striking distance for the AFC's top seed should the Patriots falter.

Let's take a closer look at the playoff race through nine weeks of the 2019 NFL season.

The gap has closed, albeit relatively slightly, on the Patriots in both the AFC East and the AFC overall. Their 4-0 division record will make it tough for the Bills to catch them, but only 1.5 games separate the two. The Ravens, of course, will have the head-to-head tiebreaker for conference positioning should it come to that. Remaining games against the Texans, Chiefs and Bills -- all in New England's next six games -- will largely decide both races.

Next up: at Philadelphia (after the bye)

At this point, you have to wonder how this Ravens team lost by 15 points to the Browns in Week 4. Since then, the Ravens have won four consecutive games and must be considered one of the best teams in football. Providing they avoid a letdown in Week 10 against the Bengals, they'll be 7-2 when they embark on the most difficult stretch remaining in their season: consecutive games against the Texans, at the Rams and against the 49ers. We'll know exactly how good they are after that run.

Next up: at Cincinnati

An impressive victory in London, combined with the Colts' loss in Pittsburgh, lifted the Texans into the AFC South lead. It would be even more impressive for them to hold that lead over their next three games: a trip to Baltimore followed by home games against the Patriots and Colts. At some point, of course, the analysis of the Texans' playoff push must include the fact that quarterback Deshaun Watson is one of two or three MVP favorites at midseason. He is a human tiebreaker. Is anyone playing the position better right now, other than possibly the Seahawks' Russell Wilson?

Next up: at Baltimore (after the bye)

So Patrick Mahomes gets hurt midway through Week 7, and at the end of Week 9, the Chiefs still have a comfortable lead in the AFC West. They're 1.5 games ahead of the Raiders, and two ahead of the Chargers. Mahomes (knee) could return in Week 10 against the Titans. But one of the most important storylines of the season so far has been that the Chiefs more than held serve with backup quarterback Matt Moore, winning two of the three games he has played in.

Next up: at Tennessee

There are two ways to view the Bills' strong start. On the one hand, they have six victories against the third-easiest first-half schedule in the NFL, according to ESPN's Football Power Index (FPI). That includes Sunday's home win against the hapless Redskins. On the other hand, a Bills team -- regardless of its strength of schedule -- hadn't started 6-2 since 1993. Their strength of schedule ranks No. 26 the rest of the way, and the Bills have put themselves in a pretty good spot in the AFC wild-card race, and perhaps even the AFC East should the Patriots stumble.

Next up: at Cleveland

In many ways, it's a minor miracle that the Colts are in the thick of the AFC playoff picture after the August retirement of quarterback Andrew Luck. And after the Week 9 knee injury of new starter Jacoby Brissett, backup Brian Hoyer kept the Colts competitive in Pittsburgh, though he did throw a pick-six in a two-point loss.

Next up: vs. Miami

Victories in their first eight games have given the 49ers the second-best start in NFL history for a team that had fewer than five wins the previous season. But the corresponding schedule is about to take a turn. Their next five opponents include the Seahawks, Packers, Ravens and Saints. The 49ers look like a strong and balanced team, especially after their offense produced 79 points in its past two games. But we're about to find out for sure.

Next up: vs. Seattle

As they emerge from their bye week, the Saints have a two-game lead in the NFC South and a 95.1% chance to win the division crown, according to FPI analysis of their upcoming schedule and matchups. With running back Alvin Kamara expected to rejoin quarterback Drew Brees back in the lineup, it'll be time to start gauging the Saints' prospects for home-field advantage in NFC playoffs. The key game might well come in Week 14, when they host the 49ers.

Next up: vs. Atlanta

A shockingly flat performance in Los Angeles produced the Packers' first loss in five games, but they remain atop the NFC North and in position to dictate the second-half race. They'll get a home game against the Panthers in Week 10 and then a bye to prepare for a much more important West Coast game at the 49ers in Week 12. The Packers will also appreciate the head start they gave themselves in the division race when they finish the season with three consecutive NFC North games, including two on the road.

Next up: vs. Carolina

A minisurge from the Eagles meant the Cowboys needed a victory Monday night in New York to hold their lead in the NFC East. The Eagles have won two consecutive games, and the Cowboys' victory over the Giants was critical, as their schedule is about to get interesting. Over the next four weeks, they'll play three teams that currently are a big part of this playoff picture: the Vikings, Patriots and Bills. The Cowboys have already experienced one dud against a bad team in New York -- a 24-22 loss to the Jets -- and needed to avoid another.

Next up: vs. Minnesota

A wild overtime victory over the Buccaneers was a reminder that Wilson has been the single best player in the NFL during the first half of the season. He threw five touchdown passes, including the game winner, and at this point, it is difficult to imagine the Seahawks ever truly being out of a game with Wilson behind center. Now the fun really begins. They play the 49ers on Monday Night Football in Week 10, their first of several opportunities to get to the top of the NFC West.

Next up: at San Francisco

Losing to an AFC team -- as the Vikings did Sunday in Kansas City -- is preferable for tiebreakers compared to losing to an NFC team. The Vikings didn't lose any ground in the NFC North, which went 0-4 in Week 9, but they missed a chance against a Mahomes-less opponent to pull into a virtual tie with the Packers. You can find plenty of reasons to poke the Vikings after this loss, but here's one statistic to keep in mind in the second half of the season: The Vikings are 0-10-1 with quarterback Kirk Cousins in games when they face a fourth-quarter deficit. That's not a formula for winning close contests down the stretch.

Next up: at Dallas 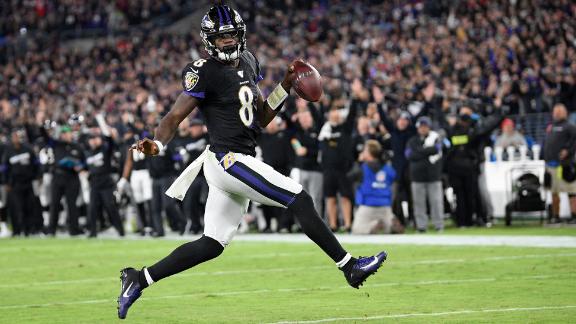 Lamar Jackson serves up 3 TDs vs. Patriots
Lamar Jackson runs for two touchdowns and throws for another as the Ravens beat the Patriots 37-20. 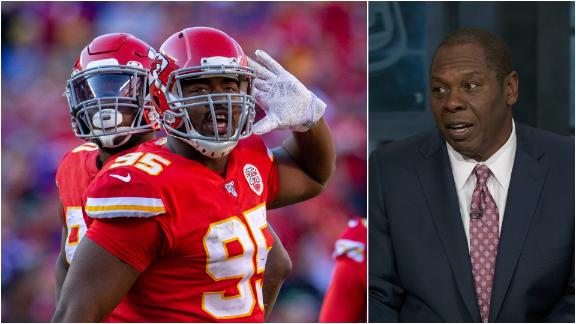 Jackson: Chiefs' defense needs to repeat this effort in playoffs
Chris Berman and Tom Jackson analyze the Chiefs' victory against the Vikings and what Matt Moore needs to do for the team. 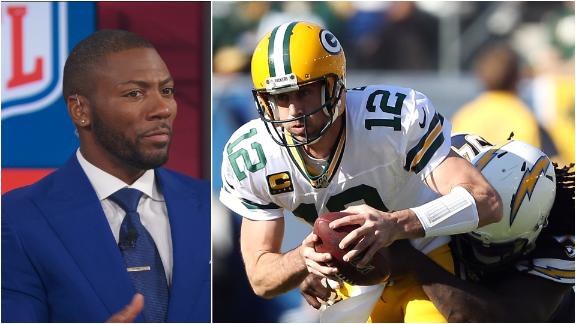