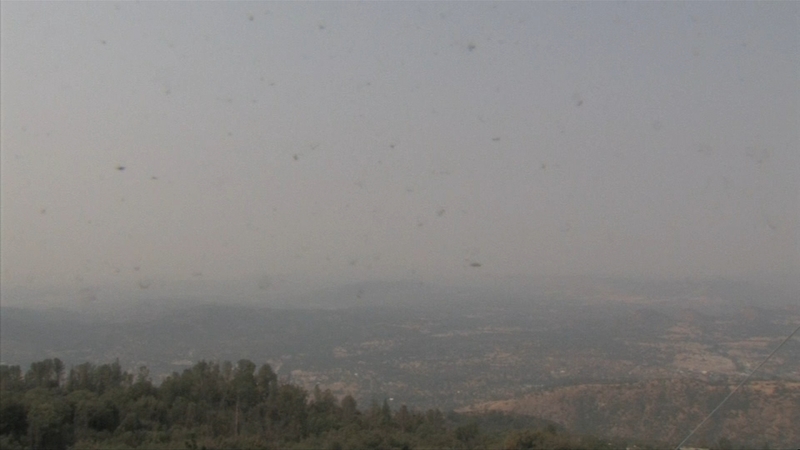 Because of that, at least one local school district decided to move sports practices inside or cancel them altogether.

A thick layer of smoke filled the sky Monday from downtown Fresno to Meadow Lakes.

"We are seeing this across the entire Valley and actually it's across the state right now is what we're seeing," said Maricela Velasquez with the San Joaquin Valley Air District.

Right now, the Valley's air is impacted by eight wildfires burning across the state, including the massive Dixie Fire in Northern California.

The San Joaquin Valley Air District issued a health caution and Air Quality Alert recommending everyone, especially those with health conditions, stay indoors as much as possible.

"This will actually impact not just those people who are with a chronic health condition. This potentially has, you know, can impact everyone, even someone that is healthy," said Velasquez.

With temperatures expected to climb over 105 degrees, 10 cooling centers opened across Fresno.

Ten cooling centers will be open today, August 16th from 1pm-7pm. The @NWSHanford has forecasted the temperature in #Fresno to be at or above 105 degrees. ☀️Here is the list of the cooling centers: pic.twitter.com/n81loBSE6r

But some people were still outside exercising Monday morning.

He wore an N-95 mask, the kind recommended by the Air District, as he walked three miles.

"I usually get between 45 minutes to an hour either biking or walking along these trails, so today I'll get about an hour, but it's only with the help of this mask because of the smoke," Brewster said.

Nearby, it was the first day of kindergarten for students at Garfield Elementary School.

Nico, a kindergartner, got to spend time outside since he was a morning kindergarten student.

His dad picked him up after school and said he wasn't overly concerned about the conditions at that point.

"The air quality doesn't seem to be too bad today and the winds are kind of blowing, so it really hasn't been that big of a problem for us," said Nick Caraker.

Clovis Unified School District told Action News it has protocols in place to determine if recess or after-school sports will be moved indoors depending on the air quality.

Valley air district officials say the particles that are in the air right now are so small they can move into the bloodstream.

You can track the latest on the air quality in your neighborhood online by clicking here. You can also download the Valley Air District mobile and tablet app.