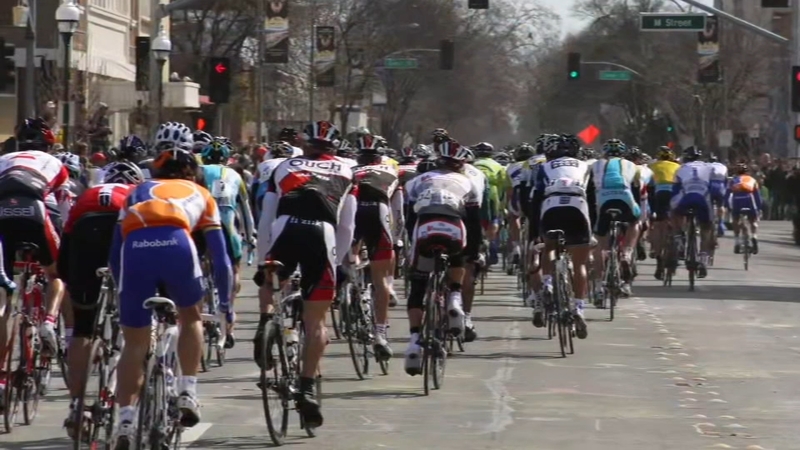 MERCED, Calif. (KFSN) -- Merced is now one major step closer to hosting the largest sporting event in the city's history. Council members have unanimously approved a plan that would make Merced a start and finish for the Amgen Tour of California bicycle race in May.

It's been ten years since Lance Armstrong and more than 100 other top cyclists from around the world raced through downtown Merced during Stage 4 of the Amgen Tour of California. But now the city is ready to bring the event back in a way that's bigger and better than before.

Local cycling expert Doug Fluetsch has been working with race officials to design a route, which is still being finalized.

"Essentially it's from Merced up through Mariposa into Midpines, then around a road called Whitlock Road which overlooks the backside of Yosemite," Fluetsch said. "It's gorgeous up there, then Bear Valley, then through Hornitos, which is where Ghiradelli Chocolate started, which is kind of neat."

The cyclists would then head down through Snelling, and Fluetsch hopes UC Merced, before finishing near the historic Courthouse.

The event draws not only local reporters who you may recognize but also international media with an estimated 15 million viewers in 200 countries. It also brings race support staff and thousands of fans who spend money on hotels, shops, and restaurants.

"There was a study done on what Elk Grove got out of it, and they got $900,000 return on it, and then the PR brought the total value to about 1.5 million," Fluetsch said.

The city would need to provide about $80,000 worth of services, but the remaining cost of about $300,000 would be covered by sponsors and donors, including the owners of the new Tioga Hotel, which will be open before the race hits Merced on Monday, May 11.

"This one is a no brainer. It's a fantastic investment to make, and not only is it a good return on investment that comes with it, but it's also a nice thing for our residents," Murphy said.