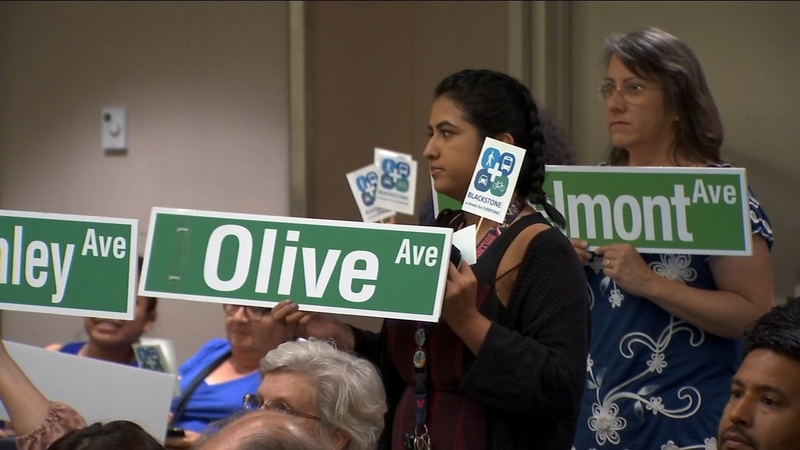 FRESNO, Calif. (KFSN) -- Making Fresno's Blackstone Avenue safer and more pedestrian-friendly is the focus of a new plan presented on Thursday to the City Council.

The plan focuses on the southern stretch of the street, and calls for bigger sidewalks, better crosswalks and slower speed limits.

The goal is to not only make Blackstone safer, but more attractive as well, adopting some features that would encourage walking and riding, and not driving. But right now, it's just a plan on paper.

The plan aims to make Blackstone more accessible and safer for pedestrians and bicyclists, which some say is dominated by space for vehicles.

The proposal pushed by the Fresno Metro Ministry and the Local Government Commisssion calls for making the sidewalks wider from Highway 180 north to Dakota and slowing the speed limit from 40 to 30 miles an hour, to reduce pedestrian deaths.

"While having ridden down Blackstone I have been the victim of harassment by motorists as well as being struck by a car in 2010," says one Fresnan, Celesete Martinez.

But it's not in the city budget and the intiial cost of nearly $3 million, with long-term costs projected to be over $50 million.

The city council approved accepting the plan, but Assistant City Manager Jim Schaad said the actual project is not in the budget.

"I don't even know if it would be appropriate to start funding construction. It most likely wouldn't occur next year. We could certainly look at that, but it seems like we have quite a bit of process to go through before we would even start looking at that type of funding," Schaad said.

"I would encourage all of you guys to show up, make phone calls, because that's the only way we will be able to move those things," Soria said.